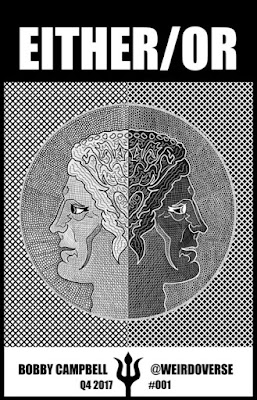 Amid the news of the release of Bobby Campbell's RAW Art by Hilaritas Press — the first release of a publication by Hilaritas by someone not named "Robert Anton Wilson" — I did not want it to get lost that Bobby has released a new comic, EITHER/OR: Psychonaut Comix in Black and White.

It's a collection of single panel cartoons, and as the title says, they are all black and white drawings, allowing the art to display equally well on any screen. The cartoons (visual koans? inspirational mandalas?) draw heavily from Robert Anton Wilson, and the figures that inspired him, so in addition to RAW, James Joyce, Timothy Leary, Aleister Crowley and others are quoted, although there are cartoons that for me did not have an obvious RAW connection — even Angela Davis pops up. I have it on my smartphone to provide positive moments.

I got my copy from Amazon, but it's also available straight from Bobby for "pay what you will" (suggested price, only a dollar).
on January 04, 2018

Thanks so much for the write up, Tom!

I was out shoveling snow today and started getting notifications on my phone that people were getting comix from the store, which was a most welcome surprise!

And so also thanks very much to everyone out there that downloaded my little funny book!