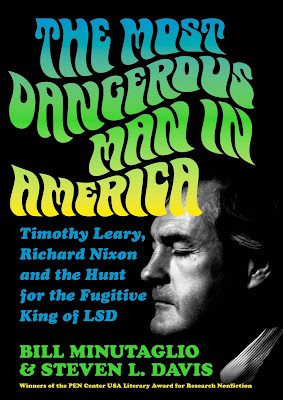 The new Timothy Leary book, The Most Dangerous Man in America, which I need to try to get around to soon, is taken up in a new interview of one of the authors, Steven L. Davis, by R.U. Sirius. The interview itself is quite interesting, but the implied endorsement also caught my attention. R.U. Sirius was a friend of Leary's and also wrote a good biography of Leary; the interview implies the new book is worth reading.

Here is a striking quote from Davis, which R.U. Sirius highlighted on Twitter: "Tim had to keep shape-shifting to save his own skin. He basically became a pawn of both the far left and the far right (Nixon and his cronies) during this era – and of course when everything ended and he looked back on it, he realized that the law-and-order struggles between the far left and the far right were two sides of the same coin. I think the experience made him suspicious of any alliance after that. Hell, it would do the same to any of us!"

I'm amazed there hasn't been a movie made about Leary, thought the odds of it being fair and nuanced are low.

The new book is getting a LOT of publicity, so perhaps the chance of a movie has gone up recently. I haven't mentioned every notice I've seen, but I've spotted reviews in the Wall Street Journal and The Week magazine.

I had a post in 2016 about a Leary miniseries in the works on HBO, but I've seen nothing about it recently:

Leonardo DiCaprio's father George was good friends with Leary, and there was buzz about Leonardo playing Leary in a film based on Flashbacks, but that was around 2006 or so: I doubt it will happen.

A feature length, high-production value film on Leary seems "missing" from the culture, as does a a feature on General Smedley Darlington Butler.

War is a racket?

Yea, Butler wrote that (famous thin book), but Crikeys!, if you wanna get a feel for his epic life, read the adult graphic non-fiction book Devil Dog:
http://www.berkeleydailyplanet.com/issue/2011-03-09/article/37447

A long time ago, Oliver Stone said he wanted to do a movie based on Butler, but now? I'd rather Stone stay away from that.

I went to an event here in Austin where the authors discussed their relationship with Leary, the book, and the era. It was a blast. And yes, there was plenty of talk about how there needs to be a Leary movie or miniseries.

The book is fantastic, too. I zipped thru it in a day or two because it's such a page-turner. It focuses entirely on the 2-year period starting when Leary was sent to prison in California, then escaped, and had his adventures in Africa and Europe. A familiar series of events from other Leary bios but the detail presented here is excellent, including behind-the-scenes of the Nixon administration, and the authors are great storytellers.

I definitely recommend it.