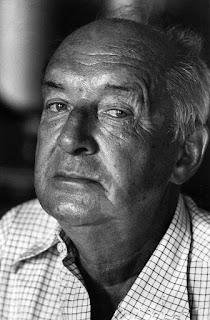 When I was a high school senior, back in the 1970s, the teacher in my creative writing class assigned us to read Vladimir Nabokov's early novel, Despair.

My high school teachers back in Tulsa must have been a pretty funky bunch -- some of my other assigned reading in high school included Sylvia Plath's The Bell Jar and Robert Heinlein's Stranger in a Strange Land.

In any event, I really liked Despair, and it got me interested in reading Nabokov. Over the next few years, I read more Nabokov novels, such as Lolita and Pale Fire, and more obscure ones such as King, Queen, Knave and Glory.

Nabokov has to overcome many dangers in order to become the mature novelist who wrote Lolita and Pale Fire. He was born into a wealthy family in Russia, but his family fled in the wake of the Bolshevik revolution. At first, he lived in Berlin. Eventually, he married a Jewish Russian woman and had a son. Germany became an unsafe place for a family with Jews, and even moving to France could not keep Nabokov's family safe.

As the Germans began to overrun France in 1940, Nabokov finally managed to secure an exit to America. Andrea Pitzer writes in The Secret History of Vladimir Nabokov: "The Nabokovs' American visas were finally issued on April 23."

Once in the U.S., Nabokov led a financially precarious existence for years, cobbling together a modest income from part time teaching jobs and freelance writing. He finally obtained a full time job as a college professor at Cornell University. Lolita, published in 1955, was a best seller, and allowed Nabokov to become a full time writer.

Although Lolita is Nabokov's best known novel, Pale Fire, published in 1962, is my personal favorite, and also influenced Robert Anton Wilson's use of footnotes in The Widow's Son, according to Eric Wagner. We'll begin the exploration of the book on Jan. 15.

Nabokov never owned a home anywhere. On 1961, he and his wife moved into a hotel in Montreaux, Switzerland, and he lived there until his death in 1977.

Nabokov was born in Russia and wrote in both Russian and English. (The earlier novels such as Glory and Despair were written in Russian and later translated into English.) In his 1964 interview with Playboy magazine, Nabokov said, "I am an American writer, born in Russia and educated in England where I studied French literature, before spending 15 years in Germany. I came to America in 1940 and decided to become an American citizen, and make America my home. It so happened that I was immediately exposed to the very best in America, to its rich intellectual life and to its easygoing, good-natured atmosphere. I immersed myself in its great libraries and its Grand Canyon. I worked in the laboratories of its zoological museums. I acquired more friends than I ever had in Europe. My books — old books and new ones — found some admirable readers."

Let us hope that Nabokov would consider us "admirable readers."

I find it interesting that a book published in 1962 has a Charles Xavier, even calling him Mr. X at one point. This makes me think of the founder of the X-Men. Speaking of comic books and Bobby Campbell, Pale Fire also has a Mr. Campbell.