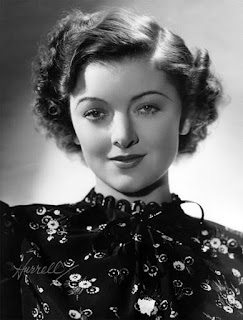 Publicity photo for Myrna Loy, who appears in Manhattan Melodrama.

I finally got to see Manhattan Melodrama, the movie mentioned in Illuminatus!, and enjoyed it. I generally like old movies. My wife did think it was a bit over the top, and I see it Jesse Walker leaves it out of his "Top Films of 1934" list.  In any event, it's not hard to track down a copy if you are curious about the movie, as I was.  Thomas E. Jackson, a longtime character actor who has my first and last name and middle initial, although not my middle name, has a role in the film. Robert Anton Wilson has mentioned that a 1923 Surrealist art show included a sign that said, "Dada is not dead. Watch your overcoat." Manhattan Melodrama has a plot twist in which two of the main characters learn to watch their overcoats.

The General Slocum disaster is vividly depicted at the beginning of the movie; the tragedy took place June 15, 1904, one day before Bloomsday, and is mentioned in Ulysses. The movie is noteworthy for including an early version of the song "Blue Moon," which I know best from the lovely cover by the Cowboy Junkies.

Cool, and yesterday we had a blue moon.

It was the only honorable mention I had for that year, which I guess makes it #11.

" I had taken over management of the Committee for Surrealist Investigation of Claims of the Normal (CSICON) after the death of its founder, Prof. Timothy F.X. Finnegan, of Trinity College, Dublin, and that CSICON still offers $100,000 to any "normalist" who can produce "a perfectly normal person, place or thing -- or even an ordinary sunset. Or an average day. "
Hilaritas has it's hand's full. I heard they deal with CSICON submission administration. That is the rumour.