All along the watchtower, secret masters kept the view 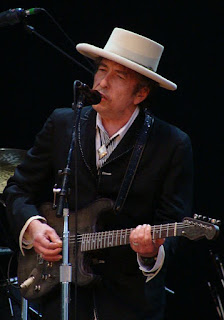 Robert Allen Zimmerman aka Bob Dylan. Who knows what They call him?

At Reason's Magazine's Hit and Run blog, my favorite source of political insight, Jesse Walker veers from the usual sorts of topics to write about musician Bob Dylan's evangelical phase. (I like Dylan, too, but Jesse is a bit more of a completist than I am.) The occasion is a new book about Dylan, which Walker wrote a blurb for. But when I read Jesse's post, I wasn't expecting this bit:

It also includes a bonus for any aficionado of strange conspiracy theories: In their interview with one of Dylan's former personal assistants, Dave Kelly, he relates a bizarre tale in which a mysterious man supposedly wormed his way into Dylan's entourage while the singer was playing a series of shows in San Francisco in 1979. According to Kelly, the stranger went out to dinner with Dylan and concert promoter Bill Graham for several nights, with Dylan assuming the man was a friend of Graham's and Graham assuming the man was a friend of Dylan's. The fellow then allegedly explained that he was a representative of "The Fifty-Five Families," an Illuminati-like group that had sent him to keep tabs on the musician.

Well, if the Illuminati are keeping an eye on Bob, maybe he can deny he's a member.

More from Jesse on conspiracy theories, the Illuminati, etc.
on August 26, 2015

You gotta serve somebody. Elvis and John Prine were in the army. What about Bob?