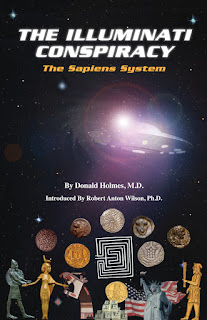 New Falcon sent out an announcement this weekend that it's reissuing The Illuminati Conspiracy: The Sapiens System by Donald Holmes, M.D.

I know nothing about the book, but Jesse Walker, who also got a copy of the announcement, wrote to me and said, "Wilson's introduction to this book is much more substantial than most of his intros."

From the publisher's page on the book: UFOs, Mafiosos, Presidents and Popes. Conspiracies, secret societies, murder, money, suicide, sex, and scandal. As Robert Anton Wilson says in the Introduction: “As soon as we find evidence of human beings on this planet, we find evidence of secret societies. If there...is one big jumbo conspiracy governing this planet, it must be...of non-human origin.” “One day a noted psychiatrist found himself having an experience which his training and background would either deny, or characterize as pathological. Since he had the presence of mind to write down the information he was receiving from an ‘unknown’ source. The results of this experience are intelligently and brilliantly written. The ideas are startling and may just be the Truth.” Who is In Charge of This Planet? Is it revolving, or going sideways? Who are we and where are we going? Dr. Holmes lets us in on the secret. I am glad someone had the courage to let the cat out of the bag with such a large bang.” —Robert Anton Wilson, Ph.D.
on August 23, 2015

This book has a great, long intro by Bob.

What's the book like? Is it worth a read?

Alas, I never finished it. I don't remember anything except the intro which I over and over.

Intro as a preview on B&N.

I ordered this from Abebooks earlier this year and was quite....ummm...shocked by a certain current in the book. Basically, there is an overt sexual tension, for want of a better term, between the protagonist and his twelve year old daughter. It's a fictional tale and it finishes with some rather outlandish and optimistic conclusions about some of the darkest passages of history.

Oh and the author appears on one of the audio seminars from raw that is doing the rounds on youtube. I think he introduces RAW at some New Falcon event.

He did the intro to will helm Reich in Hell. I haven't read this book. Laminate further upon it. What was shocking? Is it gross?