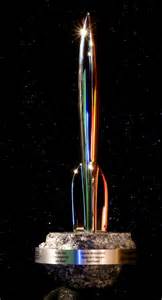 As I have written before over the Hugo Awards controversy (for example here), I thought I should provide an update. The 2015 Hugo Awards have been announced, with "No Award" winning in several categories, the one where the sad/bad/mad/rabid Puppies have bloc voted to get their nominees in. The left/and or people outraged by the block voting organized their own bloc to make sure no one would win.

My thoughts: (1) the best novel winner was The Three Body Problem, Cixin Liu. It's a fine novel. (Read my interview with the translator.) Last year's winner was Ancillary Justice, Ann Leckie, also a very good book. (2) I would have preferred that the voters consider each nominee, even in the "contaminated" categories, and vote their conscience, knowing that "No Award" was a possibility, but obviously this was a minority opinion and (3) How will the awards be reformed to take some of the politics and bloc voting out of it? I haven't seen any reports on that yet, but obviously changes need to be made. It would also be nice to address Eric Flint's criticisms, referenced in the link above, that it isn't the 1940s anymore and the fiction categories should be modernized to reflect that.

Politics slaps science fiction back into it's proper place and imposes it's dominance. If these people can't even maintain decorum, these sensible fans, what hope is there for insensitive fanatics of political struggle to express themselves democratically, with imagination. The minds of the Hugo Awards, these maverick scholars, cannot game their own voting ? to be...not fair...noo, no one wants or needs that much. A spectacle? Yes, but a worthy one. Not a pantomime of human politics! Cybernetic realtime voting cannot be made legal...for important geopolitical contests. What are we fighting for here? What am I demanding? Imagination. Readers here all likely have though about real-time voting. We need some innovating on the applause-o-meter.