A political split among RAW fans? 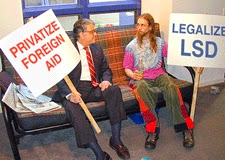 Scene from a typical Libertarian Party convention, according to The Onion.

When you gather together new-age heads and materialist rationalists, American libertarians and British socialists, the focused and the vague, the serious and the silly, the human and whatever it was that accosted me earlier, it does not sound like a recipe for getting things done. The only thing we all have in common is that we have at some point read Robert Anton Wilson and recognised and valued the impact that he has had on us.

I've boldfaced the bit that I want to talk about for a moment.

Many want to be free. Not many can handle it. They need label-makers for everything. More music Tom, please, is my vote for today.

I was re-reading sex, drugs and magick today and I was kind of surprised to see RAW describe himself as a right wing libertarian. It was the "right wing" bit that surprised me. Surely the idea of a universal wage can't be considered right wing? I know RAW vehemently rejected the marxism he had once embraced but it seems to me that the non-judgmental and compassionate philosophies of the man would be anathema to most right wingers.

RAW described himself in different ways at different times, so any particular label should not be taken too seriously. I have argued elsewhere that, most of the time, his philosophy came pretty close to the left libertarianism of the Center for a Stateless Society.

There's a much stronger current of left-wing libertarianism in the UK, it is however not usually called libertarian since the American Right adopted the term (originally of course it was a synonym for anarchism).

So, it is perfectly possible critique Labour from the left whilst being anti-authoritarian. In the UK I also find you're more likely to get people supporting a welfare state as a means to liberate people from the realities of poverty under capitalism, rather than out of some narrative of the state looking after you.

There are also some American left wing libertarians who consider themselves socialists in the tradition of the great individualist anarchists such as Tucker, Spooner and Proudhon, all of whom RAW considered political influences. I am one of them. You can see that strain of "libertrian socialism" most prominently at https://c4ss.org. Please do visit us!!!

Another "leftist" influence on British libertarianism is Russian anarchist Peter Kropotkin, who lived in England fro some time and interacted with British socialists while there. He also co-founded Freedom Press which is still extant.

I seem to recall that during his time in Ireland Bob developed an appreciation for the social amenities of the European states, and he frequently expressed his alignment with 90+% of the Democratic policies, along with a great disaproval of their authoritarian tactics. Maybe

Commonwealth countries also have that (small "L") left-Libertarian reading of libertarian. I still think of that as the original libertarianism from before the American Right drowned it out with all their shouting :)
Actually, thinking about it again I'm not sure how many places have fully taken on the American usage (perhaps in the U.S. it's so common the other meaning is lost - but not elsewhere?) though anglophone countries will have been adopting it to varying degrees through saturation in ubiquitous American Media.

Libertarians are traditionally leftists; it is only in America that you have right-wing libertarianism; In england you would just call them classical liberals, I guess, although we are starting to adopt the american terminology, esp on the internet. Conservatives are not libertarian; they are corporatist and authoritarian.

The Libertarian party was always a little kooky for my political states. I tend to lean more left.