Floating inside the tank 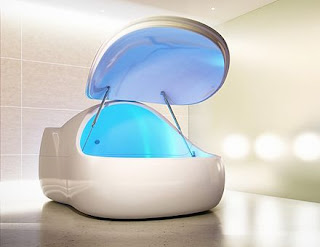 A modern floatation tank, according to Wikipedia. The one I used was much less sleek looking.

I finally got to try using a floatation tank Friday, something I had wanted to do for a long time. When I had gotten interested in trying one, I had done a little Internet searching and found that there weren't many of these things in Ohio, and they were kind of expensive.

A local "wellness place" in the Cleveland area, Optimal Wellness Center, had put sessions on sale via Amazon, and I bought one.

It turned out that you couldn't just take your voucher and show up; you had to make an appointment in advance, and apparently lots of other people had bought vouchers, and I had to cancel my first appointment.

So although I bought my voucher in May, I didn't get in finally until August.

Since I was a complete newbie, I had no idea what to bring to the appointment or what to do. My wife found my swim trunks, but when I called ahead, I was told most people just use the tank nude.

I was late for my appointment by a few minutes (Google Maps directed me to use a street closed for construction) but when I finally got there, the young woman explained that there was time built in between appointments and I would still get my full hour. In fact, I had a 70 minute block, with enough time to shower before I got in and out.

She took me to the room and explained that I should shower and get in the tank. Don't worry, there's plenty of air inside, and you can easily push the door open once you're inside, she said. The water is filtered between visits, she said. Someone will knock on the door when the time is up to tell you to get out.

I showed, put in the earplugs she had sold me,  and got in. The water was warm and heavy with epsom salts. I closed the door behind me.

The tank was longer than six feet and felt perhaps four feet wide, with maybe a foot and a half of water. It was dark, although there was a tiny light on one end. It didn't seem to matter much if I closed my eyes or kept them open.

I hadn't prepared any meditation; Oz Fritz, who has used one for years says, "I've been working with a tank for almost 10 years on a daily basis and I can say unequivocally that the best way to use a floatation tank is to open the door and get in it."

All of my anxiety at having bungled the trip to the wellness center (I had forgotten my cell phone and left it at home and actually had to get out of the car to ask directions at a florist shop) floated away. At first I put my hands behind my head, but I soon learned to just let my limbs float in the water. It was very soothing. At times, I imagined myself a "star child" floating in the galaxy, "2001" style, but most of the time I just let my mind wander into pleasant thoughts. I enjoyed it, and I was sorry to have to get out when the knock came at the door. Oz says two to four hour floats are very good, but I had only paid for an hour. I would have been happy to stay longer.

I had lots of epsom salts on my body when I got out and was glad to be able to shower and wash them off. But I felt VERY relaxed.
on August 15, 2015

It looks like it was a Samadhi tank you used. I've heard that several new companies have jumped into the tank manufacturing field recently.

I was surprised to hear they sold the earplugs and didn't provide them gratis.

The Universal One Church is one of the largest online resources for men or women to become faith based ordained ministers. Remember not all online ordinations are the same! www.universalonechurch.org

Hot tubs and Internet ministers. What is next,nor gone chambers? Humbug! Well, meditation is quite beneficial. I intend on putting a fibreglass dome on my tub now. Hanging on to myope card that RAW invented though, to survive the hotbeds of moral turpintine. Did gratis, or earplug, or both attract faith-based web crawling business. Tom got caught on the upswell sell. Treasure the expensive earplugs. You never know, when a preacher will invade your tank post - experience. Great post Tom. I really enjoyed it. RAW would appreciate it. I lifted the turpintine bit from a movie on cable. Hairspay. I have faith-based hair.

Great informative site http://topassignmentwriters.com/. I'm really impressed after reading this blog post. I really appreciate the time and effort you spend to share this with us! I do hope to read more updates from you.

"I never liked isolation tanks, but I don’t doubt that they have opened doors and new brain paths for many of their users."