Did RAW listen to Lou Harrison? 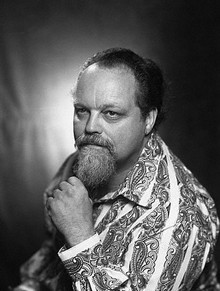 Arvo Pärt is a serious modern composer who has achieved a remarkable feat: Large numbers of people actually have heard his music. That's something that can be said about only a few modern composers. After he experimented with some of the usual modernist styles, Pärt came up with a spare, minimalist style that he calls tintinnabuli.

There is a telling anecdote about one of my favorite Pärt pieces, a much-recorded two movement work called "Tabula Rasa." The music critic Alex Ross records in his book, The Rest Is Noise, that the piece was played for dying AIDS patients. The patients would ask for the "angel music" to be played again, their term for the second movement of the work, "Silentium."

Because of his popularity, I wonder if RAW knew of  Pärt, just as I wonder why RAW never mentioned composers such as Philip Glass, Steve Reich and Elliott Carter.

The other composer I want to mention is Lou Harrison (1917=2003), also a much-recorded composer who wrote music that was unique but also more listener-friendly than many modern compositions. Harrison was much influenced by Asian music and used concepts such as microtones and just intonation.

But this is why I wonder in particular about Lou Harrison: The composer lived for many years in the Santa Cruz area, near where RAW also lived at the end of his life. A professor at UC Santa Cruz, Leta Miller, is one of the world's top experts on Harrison. Harrison's music must have been performed in the area. Harrison worked with and supported Charles Ives and John Cage, two composers RAW must have been familiar with. Did RAW and Harrison ever cross paths?

Perhaps RAW simply wasn't a big music buff ?
It sometimes feels a bit as if he had one main reference in music (Beethoven), and one in cinema (Orson Wells). Now, I do not doubt he knew much more than these two, but RAW seems to be the kind of person who would give his undivided attention to any piece of art he subjects himself to, and there is only so many hours in a day.
Reading and writing seems to have been his main focuses.


I had never tought about it before, but your post made me realize that there is in the music of composers such as Steve Reich or Terry Riley something almost hologrammatic, what with these tape loops that always repeat, but never quite exactly in the same way, like a river constantly flowing but never really the same.
I believe that, at least on an intellectual level, this could have appealed to Bob.

Raw mostly talked about Beethoven. That's true. But he listened to other music, although I never heard him talk about it. I know my little group, Starseed, played in his house a few times, and I gave him several of our CDs which he listened to and seemed to like. After receiving a CD, he once wrote to me about our music,

"This music - intricate yet melodic as Bach, austere as a Zen shrine, sensory as a massage - seems like aural eroticism to me."

I love that quote – RAW's discerning mind and humor combined.

As for Arvo Pärt, and other obscure artists, because my own music is rather ambient, I've delved into the modern classical forms quite a bit. Years ago I bought this wonderful resource, "The Ambient Century: From Mahler to Trance: The Evolution of Sound in the Electronic Age." That book turned me onto a lot of amazing music.