Adam Gorightly in the New Yorker 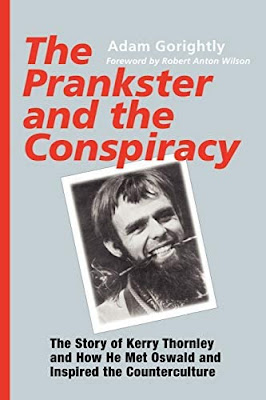 The "New Yorker" magazine runs a longish piece on the British documentary filmmaker Adam Curtis, and a familiar name pops up  in the first paragraph. After a reference to Jim Garrison, Sam Knight writes,

A few years ago, the British filmmaker Adam Curtis came across Garrison’s memo in The Prankster and the Conspiracy, a book by the zine writer and self-described crackpot historian Adam Gorightly. At the time, Curtis was trying to make sense of the political fracturing and rampant disinformation that accompanied the election of Donald Trump and, in his own country, the Brexit vote. “Normally, I hate conspiracy theories. I find them boring,” Curtis told me recently. “Then I stumbled on ‘Time and Propinquity’ and I just thought, Yes. . . . Fragments. That’s how people think now. They make associations, and there’s no meaning. That’s the world we live in.”

The article also mentions Alan Moore, a friend of Curtis and a fan of Curtis' films.

I think RAW would have loved Curtis’s films.

Thanks for this link, it's a great article. Adam Curtis does an amazing job, his films always are very dense and highly thought provoking.

I also think that RAW enthusiasts would enjoy them, there is everything in it to please them. Plus, it makes for a great exercise at dealing with information, connecting dots, seeing patterns, and sharpening one's critical thinking.