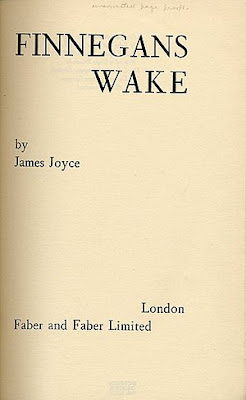 Well, I have begun to look at Joyce’s works with a “mind controls everything” model as previously described. I came across this sentence on pg. 97 of the paperback Finnegans Wake: “Preservative perseverance in the reeducation of his intestines was the rebuttal by whilk he sort of git the big bulge on the whole bunch of spasoakers, dieting against glues and gravies, in that sometime prestreet protown.” (A hardcover edition of Finnegans Wake has a different pagination. I have seen multiple books on the Wake which say that all editions of Finnegans Wake have the same pagination. As Tim Leary used to say “T.F.Y./Q.A. – Think For Yourself and Question Authority.”)

Well, over the past thirty years I’ve tried to use Finnegans Wake for healing in much the same way Christian Scientists uses the Bible, but I have not had a ton of success. Due to Bob’s influence I read Science and Health with Key to Scriptures, and I used its methods back in the 1990’s to try to heal my checkbook without much success.

At the present moment I feel tired and overwhelmed by the world of 2021. I just read the final pages of the fourth chapter of Finnegans Wake three times. Over the past ten years I have started Finnegans Wake four different times with groups of high school students. The first three times we only got about as far as page 80. (One of those groups had a large membership, but most of them started as juniors, and we usually only met for fifteen minutes a week, making it hard to make it through much of the book.) This year’s Finnegans Wake Club started once again at the beginning, and we’ve already reached page 95. We have all freshmen in the club this year, and they seem like they may want to carry on over their high school careers and read the whole book. Our pace seems good. I’ve decided to read the book three more times along with them, finishing the three previous starts I’ve made over the past decade. About ten years ago I had a large Finnegans Wake Club that read the whole book over three years. I remember the joyous day when we reached the final sentence and returned to the beginning of the book, “riverrun, past Eve and Adam’s….”  A number of students who hadn’t participated for a while joined us for that final meeting just before they graduated.

One can’t step in the same river twice, and one can’t read the same book twice. Studying the Wake over Zoom in 2021 differs from any other reading of the book I have done. I will continue to use Joyce’s work to reeducate my intestines.

This little 2013 documentary 'The Joycean Society' shows a Zurich reading group that has been painfully deciphering Finnegans Wake for (at the time of the shooting) over 25 years. It takes them 11 years years to read through. Then, they start again.
Here's a nice discusssion about it that serves as introduction :
https://www.vdrome.org/dora-garcia-the-joycean-society

I do not own any rights to this docu, but if someone here is interested I would be happy to share it somehow.

Reading this book aloud and in a group, with different people picking up on different things, seems like a more efficient way than grappling with it on one's own.

Also if you did not have time to watch it yet, in this Higgs/Moore interview Tom posted last week, Alan talks quickly about using a magickal reading of litterature. Perhaps this can be of some use to those trying to do just that.

“Preservative perseverance in the reeducation of his intestines" reminds me that the first really dramatic sign of aging I had involved a crisis of digestion and elimination, basic food metabolism, and I had to figure out a new diet that made the system work. A couple of days ago I thought the time is coming to read the Wake again. I haven't read it through completely since right after the Tales of the Tribe class in the mid 2000s. I've only read it through twice. For some reason I have two copies of Tindall's A Reader's Guide to Finnegans Wake which I have yet to read; likely will before diving into the Wake proper. I've not read Mary Baker Eddy.

I found 2 quarters in 2 days. The first was at the house I stay in on sight at a studio I work at out of town. A quarter and a dime were the only items in a small wood fruit bowl on the kitchen table. Every morning for a week I'd scan for quarters in the parking lot in the market or coffee shop with no luck. Although I had many meals and looked at my computer on the kitchen table, I didn't notice the spare change there until I packed up, looking around to see if I forgot anything thing. Sunday night around midnight, back home in a darkened house, I put my drink on a railing before getting a book to read to relax. Unbeknownst to me, Paula put a small plastic container of flower soil there which I knocked over spilling dirt onto the floor and into the fountain where the cat gets her water. Cleaning up the mess led to the discovery of another quarter beneath the soil container. This seemed very odd, I knew it wasn't mine; Paula only goes out for food shopping once a month and never uses cash.

Staying buoyant in the midst of strong gravitational pulls seems an ongoing challenge for Evolutionary Agents everywhere. Such Agents also seem to frequently get severely tested. One thinks of Leary as a prisoner and fugitive or RAW's economic challenges and tragic death of his daughter. I walked into the grocery store yesterday and heard a Grateful Dead song called, I believe, A Touch of Grey, the chorus sang: "I will survive ... I will get by..."

In yesterday's reading of Proust: "Truth and life are indeed an uphill path, and without ever really getting to know them, I felt that the final impression which they left me was one where sadness was perhaps still overshadowed by fatigue." The next page finds the narrator in Venice, his dream vacation spot since the beginning of this epic novel. "... – since we can find beauty not only in the humblest but also in the most precious things – I sampled there impressions analogous to those I had so often felt previously in Combray, but transposed into an entirely different, richer mode." The difference in his perspective reminds me of Crowley's maxim, Change = Stability.

Thank you for your comments. Perhaps we should have a 23 month reading group for Proust? (Kidding...sort of).

Found a quarter finally. And this: https://cdn8.openculture.com/wp-content/uploads/2012/11/wittgenstein1-e1353567013632.jpg
Check the upper right hand corner of the blackboard.

@littletompaine : Well spotted. Below that, it says "WC". Are we to see here a connection with all this Joycean intestines healing business ?

Perhaps that's what P.K. Dick was talking about in Ubik when he wrote 'Jump in the urinal and stand on your head. I'm the one that's alive. You're all dead.'

Part of Proust was adapted by Raoul Ruiz as 'Le Temps Retrouvé' (Marcel Proust's Time Regained, in the international version). Ruiz is one of my favorite film director, and he should appeal to RAW enthusiasts, what with his shifting perspectives, unreliable narrators, and floating identities. He also seemed to have an encyclopedic knowledge of litterature, and had influences ranging from Jorge Luis Borges to Orson Welles.
"The best way to adapt something for film, is to dream it."
https://mubi.com/notebook/posts/review-lost-and-found-raul-ruiz-s-time-regained

In the spirit of all things scatological, I had a dream the other night about "troubleshooting" a toilet connected to an archaic drainage system that was backing up in an old house - not mine but then not an unfamiliar problem in our house. I wrote down the dream and reading back over it it occurred to me that a better word might be "troubleshitting". A modest contribution I hope.

Isn't there a theory saying that the whole book is being dreamt by Finnegan, happening within those few seconds before waking up to answer the call of his bladder? Hence all the references to body functions and water in general.
Was that in Coincidance? Or am I making this up?

'It was the year when they finally immanentized the e-scatology...'