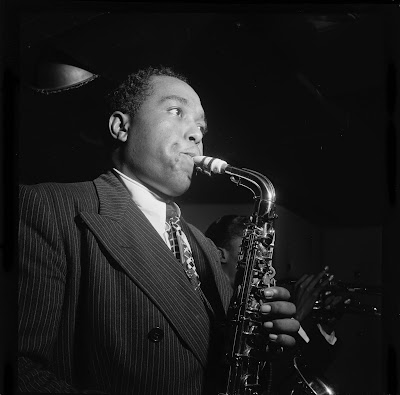 In a recent blog post, I mentioned that I was a little puzzled that Robert Anton Wilson seldom mentioned contemporary classical music in his writings.

Part of the answer might be that we all live in such a vast culture, it's impossible to pay attention to everything. I like to look at modern art in museums, for example, but I know very little about contemporary art and artists.

But there's also a possibly better explanation, that RAW preferred jazz as his main form of contemporary art music.

I've been re-reading Cosmic Trigger 2 and the other day I noticed this sentence in the "Crime and Punishment" chapter (about RAW getting himself arrested trying to integrate a barber shop in Yellow Springs, Ohio): "... the fact was that I actively hated segregation, which I considered genocide in slow motion. I had had an affair with a Black woman once (just before I met Arlen in fact.) Some of my favorite writers and virtually all my favorite living musicians were Black." (Emphasis added). And in fact, references to jazz and jazz musicians pepper RAW's writings. And while of course there are good jazz musicians of all races, most of the main developments of jazz were created by Black musicians such as Louis Armstrong, Duke Ellington, Miles Davis, Charles Parker, John Contrane and so on.

So then, it could be that RAW's preferred form of modern music was jazz, an art form created largely by Blacks that blends influences from Africa, Europe and Latin America and which is arguably more "modern" and more antiracist than classical music.

I was previously almost implying that Bob had been sorta monomaniacal about music, when actually this was mostly speaking of my own ignorance. I am glad you are proving me wrong, I wasn't especially aware of his love of jazz.

I would be curious to know if there ever was some meeting point, dialogue, or resonance between the mostly white futurist crew of the 70s (RAW, Tim Leary, Alvin Toffler etc), and the more art-oriented Afrofuturism movement, mainly started by Sun Ra. I understand that the means and goals of those were different, afrofuturism being more about making up new myths rather than extrapolating on current science. But in both cases, be it inner or outer, space sure was the place...

I think Steve Fly Pratt is a Sun Ra fan, perhaps he would know more about this issue.