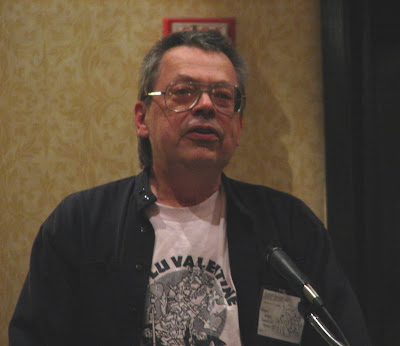 Steve Stiles, a great science fiction fan and professional artist, died of cancer in January. He won the Hugo for best fan artist in 2016.  I want to belatedly note his career here; I've seen various signs that he was a Robert Anton Wilson and Robert Shea fan, or at least knew of them.

For example, when I searched for "Steve Stiles Robert Anton Wilson" on Google, I found this archived email exchange:

>Robert Anton Wilson, author of the Schroedinger's Cat trilogy,
>coauthor of the Illuminatus trilogy, died on January 11th at age
>74 after a long illness.
>
>I met him and his sometimes-coauthors Robert Shea and Timothy Leary
>at the 1991 Worldcon in Chicago.  Now all three of them are dead.

I remember seeing the young Robert Shea walking down the street near
Rockefeller Plaza in the '60s, but, being a shy kid, didn't say hello.
Thought he looked like a young FDR, and the long cigarette holder perched
jauntily between his teeth enhanced that image. I knew him then as the
editor of "The Scene," a non-s.f. mimeographed fanzine, and a sometimes
contributor to Paul Krassner's "The Realist." I think his writing career was
in its early stages and I probably recognized him from an appearance at a
Lunacon.

You can read the File 770 obituary, or the Wikipedia article, or the official website.
on March 26, 2020