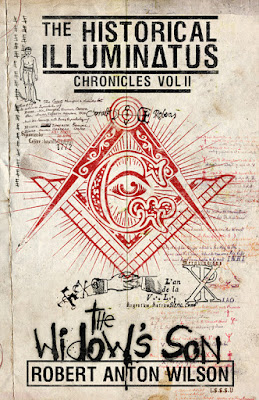 Oz Fritz was one of the mainstay commentators in the recently-finished reading group on The Widow's Son. Apparently he still had points he wanted to make, because on his blog, he has a new posting up, "The Widow's Son Discussion Group," where he talks about how important the book is in RAW's canon and how the discussion "opened my eyes to a great deal of magic and to mysteries of life in general."

I don't want to try to summarize Oz' post, which is pretty substantial, but although I've already posted a comment (paying him back a little, as it were), I did want to offer a couple of footnotes.

Oz finds a possible reference to the number 23 at the end of The Widow's Son, and writes:

I interpret 23 as a number indicating the Bardo.  The correspondences suggest both death and life, or perhaps, death and rebirth.  A primary instruction in the Tibetan Book of the Dead, the Bardo Thodol, = “maintain the thread of consciousness.  If you look at the transmission of the 23 Enigma from William Burroughs to Robert Anton Wilson as described in Cosmic Trigger I, this number, 23, most frequently came up in relation to death.  Outside of physical death, the Bardo represents a space in between where change occurs between one thing and another.  It makes sense to end the book with this correspondence, we enter the Bardo in between the second and third books of the Historical Illuminatus series.

Of course, another change between one thing and another is that Sigismundo heads west to America, along with some of the other characters who are crossing the waters. Could this be analogous to RAW growing up on the East Coast, migrating west, and spending the last few decades of his life on the West Coast?

But getting back to death, earlier in his post, Oz writes,

Many confrontations with death in the first two books of the Historical Illuminatus series have been noted.  Death appears to become as much of a behind-the-scenes-character in The Widow’s Son as it does in Gravity’s Rainbow.  I pointed out several associations or simultaneous occurrences of Tiphareth with Death.  This resonates with the instruction given many times in The Egyptian Book of the Dead for the voyaging soul to unite with Osiris upon departing the physical sheath at death.

A quote from Scott Apel's Beyond Chaos and Beyond:  In the autobiographical essay at the end of the book, Apel describes how his girlfriend Catherine kept RAW company during RAW's final days, and adds, "And at night, she read to him -- as she had done to Arlen -- from The Egyptian Book of the Dead, in the hopes of easing his transition." (This is an example of how the book has a lot of interesting material, including previously uncollected RAW writings, not found anywhere else.)

Also in Oz' post, Oz quotes the famous Calvin Coolidge quote on persistence, rendered into a poem: "Nothing in the world can take the place of persistence. Talent will not; nothing is more common than unsuccessful men with talent." Etc. I can't resist pointing out that RAW's observation on the power of persistence is an important episode of Cosmic Trigger II (to avoid a "spoiler" for those who haven't read the book, I want to avoid being more specific.)

BTW, speaking of the reading group, I've gotten all of the links caught up for it on the right side of the page, if any of you want to finish participating the group (you can still post comments -- I moderate and approve comments every day) or even want to start, with all of the free time everybody supposedly has these days.

The reading group for Nature's God, the third Historical Illuminatus! book, starts April 30. I had an old paper copy, but I just got the ebook from Hilaritas so I can read the extra material and run searches.
on March 22, 2020

Email ThisBlogThis!Share to TwitterShare to FacebookShare to Pinterest
Labels: Beyond Chaos and Beyond, Gregory Arnott, Oz Fritz, The Widow's Son, The Widow's Son Reading Group

Thank-you, Tom. Interesting that you mention Cathy Inslee, Appel's girlfriend. We've known each other since at least 1992 or so when she came to an art show I helped curate in Brooklyn featuring the paintings of E.J. Gold inspired by the lyrics of his friend, Harry Nilsson.