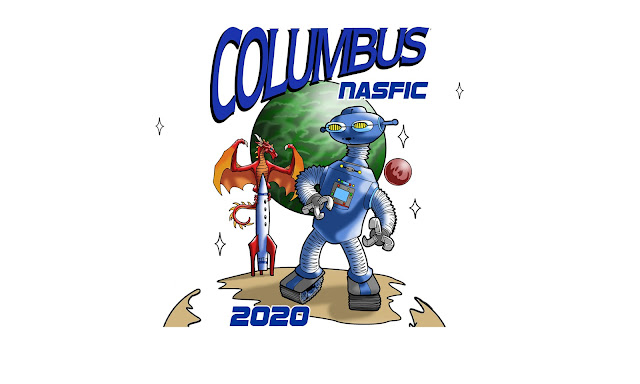 I'm pleased to report that Hilaritas Press has applied for two tables at NASFiC, the North American Science Fiction Convention to be held August 20 through 23 in Columbus, Ohio. Everyone in the dealer's room has to be accepted by the convention; acceptances will go out "on and around"  April 16 the convention says, and I will keep you posted here.

The Hilaritas Table will sell books by Robert Anton Wilson, but we also plan to give away freebies and serve as a focus and contact point for RAW fans attending what is usually one of the biggest SF conventions of the year.

Gregory Arnott and Bobby Campbell are helping me, and I will try to persuade the convention to allow RAW programming, such as a panel. Obviously, there is nothing to prevent informal get togethers by RAW fans. The Libertarian Futurist Society, which gives the Prometheus Award, also will be present at the convention.

Obviously, as I write these words, a potentially very serious pandemic is beginning to gain a foothold in the U.S. No confirmed cases in Ohio yet, but that situation is expected to end soon. Events that involve large gatherings of people already are being canceled. So we'll have to see how potentially affects the convention plans.

I wish I could simply pound the drums and publicize this, but I feel obligated to be truthful and include a note of caution.
on March 07, 2020