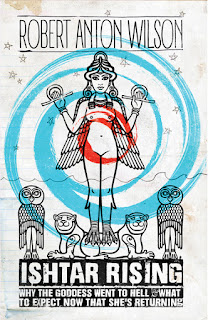 I've started reading the new Hilaritas Press edition of Ishtar Rising, and then realized I had read some of it before. Chapter 4 (of the 7 chapters), "Mammary Metaphysics," is one of the essays in Coincidance.

RAW's introduction to the piece in Coincidance provides a summary of how he felt about the book, looking back years later when he had become an established author:

The next essay comes from another potboiler I did for Playboy Press, called The Book of the Breast [footnote: Now published by New Falcon Publications as Ishtar Rising]. As usual, my philosophical and sociological speculations got in the way of lubricity which the editor really wanted, but he got fired along about then and a new editor, Martin Ebon, liked this book so much it was printed just as I wrote it. Curiously, it was the only one of my books for Playboy Press that sold well enough to earn regular royalties for me over a period of several years.

Kudos to the late Martin Ebon for not screwing up the text, read more about him here.