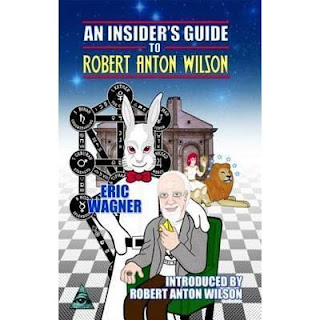 I recently had a post in which Eric Wagner, author of An Insider's Guide to Robert Anton Wilson,  answered a question posed to him on Facebook. Eric says he is willing to take other questions, so if you have one, please post as a comment to this blog post.

Here is question I asked Eric to get things started:

Tom Jackson: In honor of the the 250th anniversary for Beethoven, I would like to dig a little deeper into RAW's interest in Beethoven. What were his favorite Beethoven pieces, and did he have favorite performers? What other classical music did he seem to particularly like to listen to?

Eric Wagner: Well, Bob wrote about Beethoven’s Ninth Symphony over and over again, especially the final movement. The Hammerklavier Sonata plays a major role in The Schroedinger’s Cat Trilogy and Bob also mention it in Prometheus Rising. Beethoven’s Fifth, Sixth, Seventh, and Eighth Symphonies also show up repeatedly in Bob's writings, as does the very early Emperor Joseph Cantata. Years ago I asked him for his ten desert island discs. I think you published that once. I can’t find the list at present, but in addition to the above and the Beethoven Piano Concertos it included the Mozart Piano Concertos, “In-A-Gadda-Da-Vida”, Carmina Burana, and Scott Joplin played on harpsichord. Bob does a great job creating the musical world of Sigismundo Maldonado in The Earth Will Shake. Sigismundo particularly loves Domenico Scarlatti. Bob also loved Mahler.

I don’t know about Bob’s favorite performers. Christina Pearson and Scott Apel would know better then I would. I spent far less time with him than they did. I do remember the one time he came over to my house for a Finnegans Wake study group in 1988, I asked him what he would like to hear. He asked for a number of Beethoven pieces, all of which I had recordings of except the Triple Concerto. Then he asked for Bach’s Goldberg Variations as a change of pace.

(Incidentally, I have no news yet on when the new edition of An Insider's Guide to Robert Anton Wilson will come out. Eric prepared extensive revisions and it was supposed to be issued late last year, but it's been delayed. Eric has not received an update yet, and I got no reply when I emailed the publisher recently. Does anyone have any news on New Falcon? -- Tom)

Thank you for sharing this and the link to Bob’s desert island discs.

Wonderful idea, now just to come up with a good question. I also somehow missed the interesting desert island discs post that was linked to above. I wonder if Iron Butterfly was a joke? It seems a contrary aesthetic to the rest of the list. At least two of his choices I know and love despite lacking a classical music foundation: Beethoven's 9th, and Vivaldi's Four Seasons. Another reader, Roman T. had my all time favorite at the top of his list: John Cage's 4:33. You can listen to it any time, anywhere. The variations in it might prove extremely subtle on a desert island, like the variations in an Eno ambient cycle.

I recently looked at An Insiders Guide again when unpacking all my books after a recent move. I'm looking forward to the new edition which I'll get as soon as it becomes available.

My question: do you know if there are extant copies of the MLA courses RAW guided - Illuminatus, Crowley, there was one on politics, Tales of the Tribe or any others?

My second question: how do you think RAW would have responded to the current pandemic and the resulting social isolation and economic slowdown?

Thanks for the opportunity. I also have two questions, but will ask the second one tomorrow:
Beside the wonderful and colorful list of rock bands in the final chapter of illuminatus, there‘s hardly any mentioning of neither popular nor underground music in his texts.
Taken the important role, that different styles and scenes have had in the development of counter culture, expression of freedom and conscious altering techniques (e.g. Underground Rock in the 60/70s, Rap and HipHop in the 90s and Techno in the 90/00s) it seems interesting that it never really appeared on his screen. But maybe i am just not aware of certain thoughts and output on this issue?
Could you talk a little bit about that from your point of view?
Thanks and see you tomorrow!
DMS*

Eric, I know this has been discussed elsewhere but I'm wondering if you have any specific memories: how did RAW feel about the less-than-impressive trajectories for life extension and space migration? I can't imagine he was a big fan of the space shuttle program...aside from the ISS I've always been bitter about the switch to the shuttle.

As an expert on the Wake and RAW: what was RAW's favorite sequence in Finnegans Wake? I always imagined it was the prayer to Anna Livia which he included in Prometheus Rising but that's just fan speculation. I do say that prayer often. Inflame thyself!

Thanks for the questions. I feel slammed at work right now (even working from my dining room table). I plan to start answering next week. April seems the cruellest month....