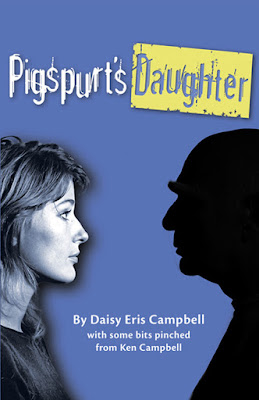 Americans have had little opportunity to enjoy the work of Daisy Eris Campbell, the British writer, playwright and performer, and the daughter of British theater legend Ken Campbell. Her adaption for the stage of Robert Anton Wilson's Cosmic Trigger has never been performed in the U.S. (an attempt to stage it in California was aborted when it unexpectedly received government funding for another run in Britain) and her tour for her "Pigspurt's Daughter" dramatic monologue only took place in Britain.

Now, however, Hilaritas Press has published a book adaption of the monologue, making it available to everyone. I just read my copy, and Hilaritas has provided a real service for Americans who want to check out Daisy's compelling madness. Pigspurt's Daughter, a short book that can be read in one sitting,  is the funniest book I have read in a long time, but it's also touching and oddly wise.

The book's subject is Daisy coming to terms with the 10-year anniversary of her famous father's death and becoming a successful artist in her own right. How she does so is quite a story. (Ken Campbell is not her only notable parent. Illuminatus! has a British secret agent who is a parody of James Bond; Daisy's mother, in one of those synchronicities that seem to flare up around Daisy, is British actress Prunella Gee, who was in a James Bond movie, "Never Say Never Again.")

Robert Anton Wilson's work often makes it difficult to tell what is real and what is made up, and Pigspurt's Daughter has similar effects on the reader. There's quite a bit about the pyramid of the dead in Liverpool being built by the KLF, and while it's as crazy as anything else in the book, apparently it's either real or the BBC is on the plot to put one over on everyone.

John Higgs wrote a witty and gracious foreword for the book which says Daisy's work includes a fictional incident that came true. So I suppose it may or may not be true, as the book says, that Higgs phoned Daisy to warn her about one of her schemes, "I have a feeling this is a very bad idea, and that bad things may happen if you go ahead." And I am kept guessing whether Daisy really did have a solemn moment in a graveyard while wearing a fat suit. But you'll want to read the book and find out what I am talking about.

The book includes color photos and occasional staging notes that provide a clear picture of Daisy's performance, and there are family photos in the back, along with a review of the play by Jason Watkins which won a prize for arts journalism.

There are lots of references in the book to the works of both Robert Anton Wilson and Robert Shea (there is quite a bit about the Cathars, the subject of my favorite Shea novel, All Things Are Lights, and the monologue begins with a mention of Illuminatus!). The rather arresting cover nicely shows off Rasa's design skills.

Footnote: I did not get a review copy; I bought it like everyone else.