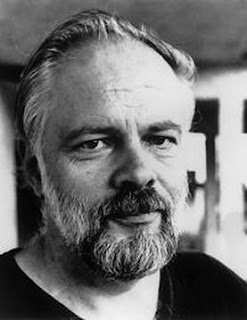 Back in 2012, I put up a blog post about the time that Philip K. Dick met Robert Anton Wilson,  at Octocon II, a science fiction convention in Santa Rosa, Calif., in October 1978.

D. Scott Apel has now weighed in with his own memories of the event, disputing certain facts reported by other parties. You should go back to my original blog post to get everything, but for your convenience, here is the account Scott recently at my blog entry:

Scott Apel said...
My my, how peoples' memories play tricks on them! In the interest of historical accuracy: I attended Octocon II in Santa Rosa in 1978, accompanying my friend Robert Anton Wilson and to perform some interviews. Phil Dick showed up uninvited--hardly as a GoH--simply because he was living in Santa Rosa at that time with a lovely woman named Joan Simpson. Kevin Briggs, my late friend and collaborator ("Science Fiction: An Oral History") and I had interviewed Phil a few months earlier, and I brought him up to Bob Wilson's room and introduced them. (The full story, including RAW's take on the event, can be found in my book "Philip K. Dick: The Dream Connection." The book also contains a very funny story of how we introduced Phil to Leigh Brackett that weekend.) While the esteemed editor David Hartwell might recall a party in his hotel room that ended up with RAW and PKD, I recall the events very differently: the PKD/RAW meeting was private, save for Briggs and me; Hartwell may be thinking of a party I attended that ended up with PKD and Theodore Sturgeon deeply in conversation--a conversation that began with Ted saying to Phil "I've waited 15 years to have this conversation with you..." In our interview with Ted later that same day, he explained, "It was a fascinating experience, when you three [Phil, Briggs and me] walked in here and I launched into this." Hope this clears up a few of the misconceptions in previous correspondents' recollections of the event.

Incidentally, the book Scott mentions is quite good.

I enjoyed that book on Phil Dick.