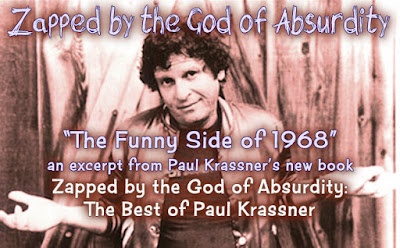 Rasa has sent out another newsletter from the RAW Trust, and he reports that the Hilaritas Press reissue of the Historical Illuminatus Chronicles will be out soon:

"Meanwhile at Hilaritas Press, our intrepid RAW Trust Literary Advisors are helping us unravel a few typographical mysteries as we edit The Historical Illuminatus Chronicles. Both the eBooks and Print editions are finished for Volumes 1 and 2. Volume 3 is going through it's 3rd proofreading — one of the final steps. We plan on releasing all three volumes of the trilogy simultaneously, or at least very quickly in consecutive order. No firm publication date yet, but we are getting very close!"

Rasa also has just published "The Funny Side of 1968" by Paul Krassner at the Hilaritas Press blog. It's an excerpt for Krassner's new book, Zapped by the God of Absurdity: The Best of Paul Krassner.

I was a guest on the Joe Pyne show on KTTV in Los Angeles. He was a mean-spirited right-wing interviewer. His questions were vicious. “Well, Joe,” I said, “if you’re gonna ask questions like that, then let me ask you: Do you take off your wooden leg before you make love with your wife?” Pyne had lost his leg as a marine in World War II. Now his jaw literally dropped, the audience gasped, the producers averted their eyes and the atmosphere became surrealistic as Pyne went through the motions of continuing the interview. On another occasion, he asked Frank Zappa, “Your hair is so long. Are you a girl?” Zappa replied, “You have a wooden leg. Are you a table?”

It's been so awesome seeing how much care Rasa and everyone is putting into preserving RAW's text as accurately as humanly possible. There's some real forensic linguistics going on trying to figure out what might be a typo vs. what might be RAW's clever prose. They're doing such great work! Can't wait for the new editions :)))

Bobby, I am particularly fond of the "Historical Illuminatus!" books and I hope the republication helps them find new readers. I also look forward to seeing your new illustrations!