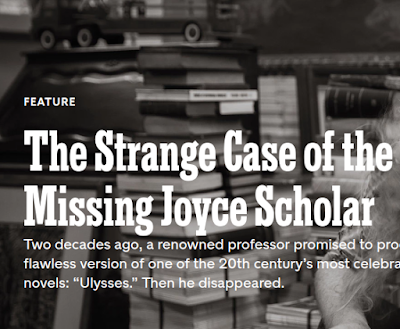 The New York Times magazine has an article about John Kidd, a once-famous scholar of James Joyce thought by many to be dead who is actually still alive and living in Brazil. Thanks to PQ for pointing it out on Twitter.

I'm not a big Joyce scholar, so please bear with me as I drag in one of my own preoccupations.

It’s not just an aesthetic choice for Kidd but a kind of compulsion toward completedness, suffusing not just how he reads literature but also how he talks about it. We discussed “Gargantua and Pantagruel” and “Don Quixote” and “Tristram Shandy.” He considers them all to be “antic” works, his coinage for books that are marked by a “comic take on the encyclopedic narrative just as the ‘Iliad’ is a tragic take on an encyclopedic narrative.” Those novels are playful, like “Ulysses,” but they mean to embrace and comprehend a sense of everything, and it’s this sense of totality and the longing for it that drives Kidd, too.

So did Kidd read Illuminatus!, an antic work with an encyclopedic narrative? Or did he miss it because it was published as science fiction?

I've been reading a book of literary criticism, largely book reviews, called What to Read (and Not) by Tom LeClair.

In his introduction, LeClair expresses a preference for books that are "monstrous," which he defines as "massive, excessive, both unliterary and super-literary, unique in their narrative combinations and linguistic deformations. Stick with them, and they will stick in you, their effect not to be forgotten. To my mind, these big books did what great literature is supposed to do -- exert emotionally and intellectually transforming power." (His examples of such books include Moby Dick and Gravity's Rainbow.)

Since Illuminatus! sounds like the kind of "monstrous" book he is referring to, and since LeClair 's introduction includes his email address and invites readers to contact him, I wrote and asked if he's read Illuminatus! I told LeClair, "The mixture of popular and esoteric literary influences was at the time (mid-1970s) not so usual as now; the book has references to James Joyce, but H.P. Lovecraft also is an influence and appears in the work as a character."

He replied, " I have not read Illuminatus, perhaps because any ref. to Lovecraft scares me off.  Not that I have read Lovecraft."

Well, too bad. I do wonder if many people who would have liked Illuminatus! skipped it because it was published as paperback science fiction.

I think it was 3 Quarks Daily who linked to that article by Jack Hitt. I found it riveting, esp. the David vs. Goliath-ish-ness of Kidd vs. Gabler.

I remember when that was a huge issue and came away thinking, How can anyone now buy Gabler's edition thinking he'd solved the editing problems?' And yet, as Hitt reminds us, scholars have decided to go with Gabler - one of their own - over Kidd, who's more like a lot of the folks who read this blog.

I also thought it poignant that Hitt, visiting Kidd, sorta wonders if Kidd himself is a tad daft. Yes. Yes he is. We all are. Especially Joyceans and RAW fanatics.

I have 3 different copies of Ulysses on my shelves, but I don't have the Gabler version.

LeClair's Lovecraft comment is as odd as not having read Illuminatus! I wonder if he includes Finnegans Wake among his favorite "monstrous" books.

Michael, great points, agreed on all. I have 4 copies of Ulysses and don't have Gabler either.

Always wondered if Kidd's edition of Ulysses would ever see the light of day but the article seems to suggest that isn't happening.

I wrote about the mystery of John Kidd on my blog back in 2010, I wondered if this NYT piece might mention it: http://www.abuildingroam.com/2010/05/defeated-kidd-contested-will-and.html

They mentioned Kidd had supposedly died in 2010. I relayed the same info in that blog post, "Kidd died in his early 50s with his highly sought-after edition of Ulysses unpublished" and commenters chimed in to say "Alive and alive indeed!!!" and that he was in Brazil.

I really dug this article, the story is a Cohen brothers movie. The timing was also incredible since the world's Joyce heads, me included, were at a Joyce symposium in Antwerp when the article appeared (with a bang---everyone at the conference said friends were coming out the woodwork to send them the NYT piece) AND Kidd's nemesis Gabler gave the opening lecture for the conference! He only briefly mentioned the "Joyce wars" and sort of brushed it off, while I imagined everyone in the room was wondering the same thing, "Wtf ever happened to John Kidd?"

Not only that, PQ, but this graph in the article suggests it was YOUR BLOG that got Jack Hitt in contact with Kidd:

"Miguel was based in Rio de Janeiro, a fact that suddenly reminded me of a brief exchange I had with a scholar in Bucharest named Lidia Vianu. When she herself tried to find Kidd a few years ago — she and a colleague were dedicating a book to him, a 31,802-page tome called “The Manual for the Advanced Study of James Joyce’s ‘Finnegans Wake’ ” — someone had given her an email address in Brazil. But, she said, “I didn’t get very far.” The email address was dead." [But he tries the email, anyway, it it works.]

Lidia Vainu pops up your comments!

haha good point! Would've been nice to get some kind of acknowledgment. Anyway, fun story!