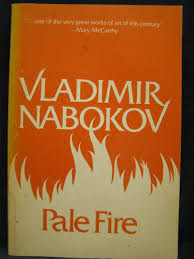 Oz Fritz has an entry on his blog about "Pale Fire: Books That Blow Your Head Off."

The phrase about exploding books is taken from a passage written by Robert Anton Wilson. Oz writes, "I have always granted certain books great power.  I would carry them around with me wherever I went believing that I could continue absorbing their contents by osmosis through the proximity of their physical corpus.  I fully resonate with the quote I heard somewhere that 'great books are monasteries.'I like to live in these monasteries for periods of time, absorbing their program then moving on.

"For  about two to three months a year from the ages of 15 - 17 The Lord of the Rings was my constant companion.  This book had the effect of greatly broadening my vision beyond human society's consensual reality, norms and assumptions feeling new neural pathways opening up."

Illuminatus! would be the most obvious example of such a book for me. Lord of the Rings was an important book for me, too, when I was a teenager. (I still like it now, too).

Oz then goes on to discuss Pale Fire in connection with his theory, also discussed by his comments to the recent book discussion group here, that "Pale Fire functioned as a multi-level didactic experiment of an esoteric/transformational nature; magick and bardo training as the Department of Redundancy Department might put it."