Celebrate 'The Prisoner' with RAW 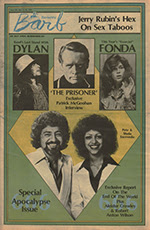 Today is the 50th anniversary of the first broadcast of The Prisoner in the U.S. To celebrate, Martin Wagner has put together a new "Robert Anton Wilson on The Prisoner"  page bringing together four pieces or videos. Included is a "new" (i.e., just made available again) article from the Berkeley Barb, May 1978.

One bizarre paragraph from the Barb piece:

Even though coup leader Captain Tequila y Mota - a fictional character in _Illuminatus!_ (mostly) written between 1968 and 1970 - had studied the real-world Edward Luttwak's book_Coup d'Etat: A Practical Handbook_, which had come out in 1969, I have never been able to find evidence Frederick Forsyth read Luttwak before his attempted coup in Equatorial Guinea/Fernando Po/Poo, which occurred in 1972, and formed the basis of Forsyth's 1974 novel, _The Dogs of War_.

Thanks for sharing this, Tom!

I was in Port Merion where the scenes for The Village were shot two years ago. Its a bit hard to get to by public transport - a few buses plus a long walk. The place itself is smaller than it seems in the TV series. Its on the west coast of Wales. Sadly number 6's house is not there. That bit was filmed in the studio, as were most of the Prisoner interior scenes. And they hold weddings there as well.There were two on the day I was there.
I bought a tarot set based on the The Village.I've never used it yet(but now that I am reminded... ). In a way that series was McGoohan's Citizen Kane.