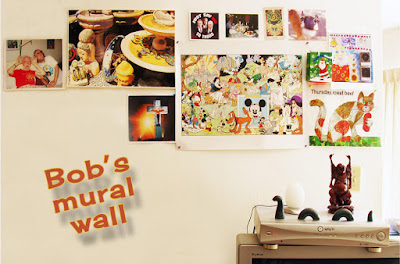 The above is a photograph took of the wall in Robert Anton Wilson's last apartment, in Capitola. Rasa explains:

"RAW's daughter Christina told me that Bob always made murals of his favorite graphics on a nearby wall. The photo of his living room wall just above the TV was taken when he was in Capitola where he lived for the last years of his life (we used the photo in the first RAW Auction). I was amused when I went to visit him one time and saw a goofy photo of one of our favorite neighborhood deer that I had sent him. Among other items on the wall is the "Disney" cartoon published by Paul Krassner, a photo of Bob and his son Graham, a photo of Bob and Arlen eating dinner at an Italian restaurant, a "Just Say No to Thugs" photo with Rumsfeld, Bush and Cheney, and the Ace of Cups Tarot card from the Crowley Thoth deck, but that Tarot card has a spiral added to it. " 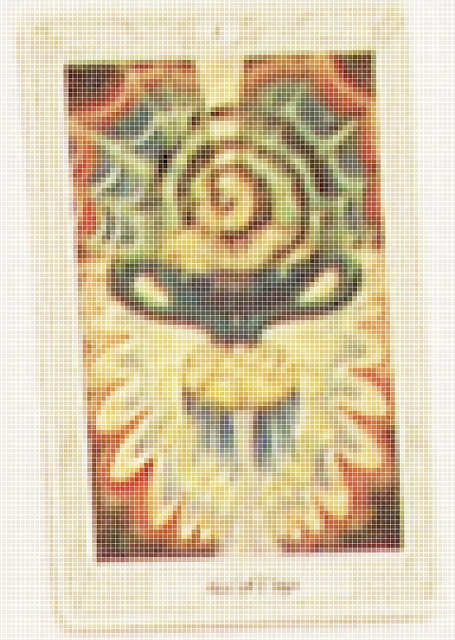 Rasa was looking at it the other day, but  one thing puzzled him. Why did that Tarot card have a spiral on it?

Christina Pearson, RAW's daughter, came to the rescue with an explanation, and with her permission I share the answer here:

"Ah, yes!  Bob was aware of the spiral from early on in life when he began to read Joyce; it was just reconfirmed over and over again in his studies as how important the spiral is in nature, alchemy, and consciousness. What is so funny is during Bob's last year, when moneys were running low, Eddie Nix came up with the idea of selling individual tarot cards from the Crowley deck (Bob's favorite), each imprinted with a stamp that Bob himself imprinted. (Back-story comment: that stamp was made by Eddie carving a potato half, with the spiral on Bob's ring). And each and EVERY card was hand-stamped by Bob himself, who really enjoyed the process. Eddie probably had to carve a number of potatoes as wee sent out a lot of cards!   This was done because although Bob could no longer sign his name as he had difficulty holding a pen, he could absolutely push down on the carved half-potato!" 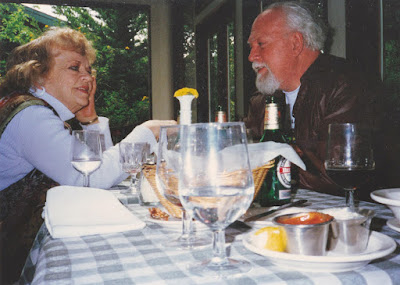 Thought some of you might want a better look at one of the photos. Bob Wilson and Arlen Wilson at an Italian restaurant in Capitola, photo by Bastian.

Note: I originally wrote that Rasa took the wall photo; he did not (see photo) so I've corrected the post.
on June 30, 2018

Just a small correction – I didn't take the photo of Bob's wall. I'm not sure who did. Christina probably knows as she sent me all the photos used in the auction. Maybe she took them.

That photo of Bob and Arlen may be my favorite of the two of them. I can easily see why he put it on the wall!

Yeah, it's a cool photo. I'm glad to have the opportunity to post it.