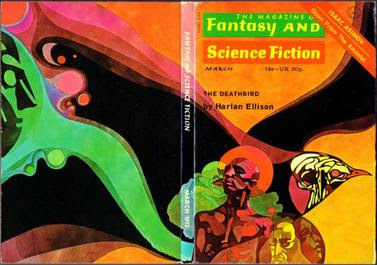 Sad news for old time science fiction fans (such as me): Harlan Ellison has died. So many memories this brings back, such as when my copy of F&SF arrived in the mail with "The Deathbird" on the cover, and times I heard  him speak at SF conventions.

And also at my alma mater. When I was a student at the University of Oklahoma in the 1970s, my friends and I formed a science fiction club, and we applied for money from the student government to bring in speakers. We brought in Robert Silverberg and Jerry Pournelle and Roger Zelazny, but the writer who drew the biggest crowd was Ellison. My old friend Richard Newsome says this was in 1977.

I was in the car that picked him up at the airport in Oklahoma City to bring him to Norman. When we got to Norman, we passed by a car in a ditch. Ellison suggested we get out and push it out. Most of the others in the car were not enthusiastic, but Ellison insisted, so we got out and pushed it out. That was Ellison: When he made up his mind about something, he did it.

The night before we spoke we had a party in his honor, and somebody (not me) asked him if he had read  Illuminatus! and liked it. He had and he did. He said it was funny.

Here is the LA Times obituary.

I nominated Ellison for the Prometheus Hall of Fame Award in 2009. He finally won the award in 2015, and made a gracious acceptance video. (When it was time to present the award at Marcon, there was some kind of technical problem that prevented us from showing the video, so instead I read from a transcript of his remarks.)