Threatened with prison for passing out pamphlets? 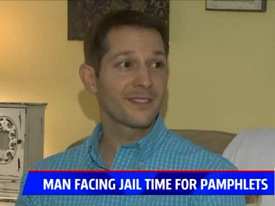 Robert Anton Wilson's Chaos and Beyond includes an essay discussing jury nullification as an important right in defending liberty in America. When I was in journalism school years ago, I was taught about the John Peter Zenger trial, a landmark in the battle for a free press in America in which a jury acquitted a newspaper publisher in defiance of the wishes of the judge.

It came as a shock to see that in Michigan, a state that's next to where I live, in Ohio, a man named Keith Wood has been hit with a "jury tampering" charge and faces five years in prison for passing out pamphlets in front of a courthouse that discuss jury nullification.

Here is another article on the arrest.  Here is Popehat weighing in.

I could not find anything about the case at the Michigan ACLU website, which disappoints me. I've Tweeted the state chapter to ask about its silence.

The judge in the case, Peter Janklevic, is a former prosecutor.