[Back in 2014, I ran across an interview with one Richard Marshall at kerrythornley.com. It made a number of startling claims about the early history of Discordianism, such as a claim that the Midget character in Illuminatus! based based upon a real person, named in the interview.

I must have been bothered by running across so much "information" that didn't seem to match what I head read elsewhere. So instead of doing a blog post about it, I wrote to Adam Gorightly, the author of Historia Discordia and two biographies of Kerry Thornley,  and asked whether I should trust the interview. Adam replied, "No, you should not trust the interview...it's totally made up."

Adam has now written a piece about Marshall, and about other odd pieces of misinformation that are out there on the Internet, purporting to be Discordian lore. Although Adam is an interesting person — he is a self-described "crackpot historian" who lives in California and is an ardent fan of David Crosby — he probably did not, in fact, meet Edward Snowden while serving in the U.S. Marine Corps and put out a newsletter with Mr. Snowden called I've Got a Secret.

At least the Gorighly biography is pretty obviously made up for fun. Other articles such as the  Richard Marshall interview purport to be factual.  Adam has now penned an article about made-up Discordian facts and has even given me permission to publish it here! 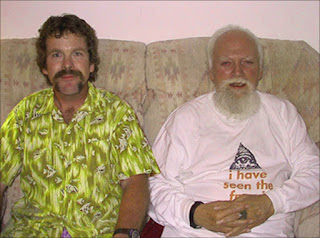 By Adam Gorightly (Special to RAWIllumination.net)

Recently, a mildly amusing bio of yours truly

was posted at Discordia Wikia

that is almost 23 percent accurate and presumably written by someone identified as Miley Spears, who in reality is most likely a somewhat notorious Discordian named Reverend Loveshade who — it appears — has not only adopted this Miley Spears persona on occasion, but also a number of other Discordian non de plumes such as Pope Hilde,

among others, all of whom pop up occasionally at 23 Apples of Eris,

not to mention a certain Johnny Shellburn (the same name of the protagonist in Kerry Thornley’s Idle Warriors) who operates KerryThornley.com where you can find an imaginary interview conducted—in typical Discordian fashion—by the aforementioned Pope Hilde with a supposed early Discordian named Richard Marshall

Richard Marshall — it so happens — also has a Discordia Wikia page

which is also probably 23 percent accurate (at best!) although there actually was a real Richard Marshall

who lived in San Francisco during the same period as Discordian Society co-founder Greg Hill although none of the real early Discordians I’ve talked to have ever heard of the guy.
According to Richard Marshall’s Discordia Wikia page (written by Miley Spears), Marshall contributed to Principia Discordia and The Illuminatus! Trilogy although I’ve never come across anything in the Discordian Archives

who is another imaginary character (based on an Illuminatus! character) apparently cooked up (once again) by Rev. Loveshade, who — it should be noted — also has a Discordia Wikia page

submitted by (you guessed it!) Miley Spears,

who — as previously noted — is actually the one and only Rev. Loveshade.

In 1970s — according to Loveshade — his mother was friends with Robert Anton Wilson’s murdered daughter and because of this Loveshade and his hippie mom supposedly became acquainted with RAW (or at least corresponded with RAW) who he affectionately referred to as ‘Grandbob’ and along the way Loveshade “became obsessed with meeting the original Discordians” and that inspired him to (supposedly) track down Greg Hill in the 1990s at a San Francisco watering hole, an account of which appeared in Loveshade’s Ek-sen-trik-kuh Discordia: The Tales of Shamlicht.

Some might suggest that a shaggy dog story about meeting Greg Hill is perfectly acceptable from an Operation Mindfuck standpoint, as a form of pranking and modern myth making. On the one hand–being a card carrying Discordian–I can appreciate this type of culture jamming. On the other hand—with Historia Discordia and related projects — I’ve taken seriously the task of chronicling, as accurately as possible, the early days of the Discordian Society and its influence on the 60s counterculture and onward. So when imaginary sources create imaginary history, it certainly leads us down a slippery slope.

In early 2012, I was contacted by an enterprising Australian lad named Brenton Clutterbuck who informed me that he was working on a book project about modern day Discordianism entitled Chasing Eris.

While discussing with Clutterbuck different latter day Discordians during a 2012 midnight skype session, he informed me that as part of his Chasing Eris project he was planning a tour of the U.S. to interview prominent Discordians, including someone going by the name of Gypsie Skripto who had been introduced to him by Johnny Shellburn of KerryThornley.com, who — as previously noted — is another one of Loveshade’s alter egos.

Using the email given to him by “Johnny Shellburn”, Brenton started a correspondence with Gypsie Skripto who claimed that she had been friends with Greg Hill and part of the early Discordian scene in San Fran in the 1970s. In response, I told Brenton that I thought someone was yanking his chain, that the Gypsie Skripto in Greg Hill’s Principia Discordia afterword was a literary device, and that this person posing as Gypsie Skripto had basically co-opted Hill’s imaginary character as a way to troll the internet and create phony Discordian street cred.

Ultimately, Brenton’s planned meeting with Gypsie Skripto in Austin, Texas failed to materialize when s/he stood him up, using the pretext that s/he had to attend some last minute political activist hippie rally fundraiser (or somesuch) and Brenton soon came to the realization that I was correct in my assumption that “Gypsie Skripto” was just one among a host of other spurious Discordian personas that all probably originate from the same IP address.
on December 19, 2015

It's pretty unfortunate that the blow-back from Loveshade's trolling also scuttled Brenton's interviews with other notable modern Discordians such as Dr. Howl and the Empress Nigel. Brenton was trying for editorial neutrality, so I applaud him for that. It seems that as much as Loveshade rides the Discordia memes, he really doesn't care about the community.

Wouldn't surprise me if Reverend Loveshade uses fake characters just like Greg Hill and Kerry Thornley did. But I think you're missing the point. Isn't that Discordian? Robert Anton Wilson's daughter verified her father knew Loveshade, and that they'd had a connection for years. You can see that on their archived blog http://www.loveshade.org/blog1/2007/01/goodbye_raw_robert_anton_wilso.html

And Miley Spears is certainly a different person. She filed a lawsuit against someone who claimed she was Loveshade--you can't fake your ID in a lawsuit. She lives in Texas and did the Miley Cyrus breaking down in Texas hoax http://www.wfaa.com/news/local/texas-news/miley-cyrus-in-cleburne-fake-car-trouble-story-makes-rounds-on-social-media/483839111 And she appeared on stage at one of Cyrus' Texas concerts. That would be damn hard to fake.