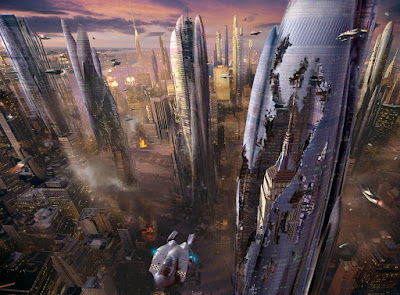 Cover art for The Unincorporated Man by the brothers Kollin

Alex Tabarrok has a post up at one of my favorite blogs, Marginal Revolution. His piece, "Venture Capital to Buy Equity in Purdue Students,"  is about a company that plans to invest in students by lending them money and then taking a percentage of the student's income after graduation, for a set number of years. It's an interesting idea because it raises risk for the people making the loan but lowers risk for the students. (If the student doesn't make a lot of money, well, too bad for the investor, but at least the young person doesn't have a massive debt.)

Professor Tabarrok doesn't mention it in his posting, and I could find no mention when I checked the comments, but the scheme is reminiscent of a rather good science fiction novel, The Unincorporated Man, by Dani Kollin and Eytan Kollin, that came out in 2009. It is largely about a future society in which every new baby is "incorporated" by investors who pay for the kid's education, with the understanding that they will get much of his or her future earnings. The investors get much of the say in what the person will major in, for example, and where he or she will study; citizens seek to become so successful that they can buy up shares in themselves and gain majority control, thus gaining control over their lives.

The system is sold as a way to make sure everyone will get an education and a chance to be successful, but in the end it prompts a revolt from people unwilling to be owned. The protagonist of the novel is a man who has been cryogenically revived. He's from the past, so he isn't owned by anyone.

The brothers Kollin have been a bit quiet of late, but there's a new anthology with a novella set in the same universe as the novels.