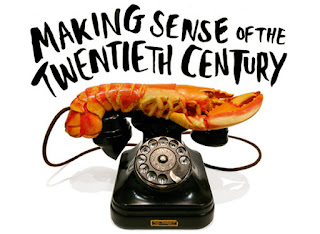 It's Christmas Eve. Where are the lobster telephones on the store shelves, then?

One of my favorite Tweets ever. But I guess we can eliminate Atlanta as the headquarters of the Illuminati. Maybe.

December Eris of the Month.

Arthur Hlavaty reviews John Higgs' Stranger Than We Can Imagine.

Year end best books lists.  Mine, when I finally do it, will include Stranger Than We Can Imagine, which I finally just finished.

Are women ripped off on pricing, or do they just buy better stuff?

Tyler Cowen: "I would offer the following (speculative) generalization.  Guys are more likely to 'just buy any usable sock,' whereas women are more likely to want 'the right socks.'  Therefore socks for guys end up being cheaper, because male price elasticity is higher.

"Yet guys are more likely to spend a lot to buy the most expensive stereo system, or the most expensive car, or make the biggest charitable donation.  There may not be coexisting 'male' and 'female' versions of these goods, as with pink vs. blue razors, but still the men pay big compared to the women.

"The now-famous WaPo Danielle Paquette piece oversamples 'regular goods' and undersamples the goods where males end up paying more.  Therefore it looks like women are getting ripped off, but in reality we don’t know the net effect."
-
on December 24, 2015