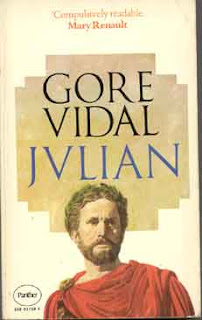 I really liked Gore Vidal's novel about the last pagan Roman Emperor, so I was pleased to see Sean Gabb likes it, too.

"I still check every time to make sure it's not a parody account."

How they voted, by party, on Britain bombing Syria. Had to look up the Plaid Cymru party. Welsh, it seems.

A guide to visiting Cuba for Americans.

Nice blog by author Only few people i like to post this things and one of them are you.
Birthday wishes

I'm reading Jay Parnin's recent bio on Gore Vidal, _Empire of Self_, and there are a few interesting tidbits and insights on _Julian_, which I love too. Parini - who sometimes writes novels of ideas himself (I'm a big fan of his novel about Walter Benjamin, _Benjamin's Crossing_), advocates reading Julian along with Vidal's _Messiah_, for a fuller view about the vast riffs Gore had about how religion has been used by power-hungry assholes in history. (Also: see his play _A Visit to a Small Planet_.)

I first got a nice purchase on the idea of the Novel of Ideas from an old essay by Vidal about Thomas Love Peacock, and remember thinking, "this is why I liked Aldous Huxley's novels so much." Then, on p.104 of Parini's book, there's a quote from Vidal from a 2010 interview with Parini:

"It was Huxley, in fact, who got me moving in certain directions: _Crome Yellow_ and _Antic Hay_, the earliest and best of his books. These were novels of 'types,' lightly satirized, always part of a larger fugue of ideas."

I think Huxley's novels of ideas got even better after those two early ones from the 1920s Vidal mentioned, but nonetheless...

Michael, I should probably read the bio. I've liked every book by Vidal I've read, and I used to read his pieces in The Nation, too. i'm come around to his way of thinking on U.S. foreign policy.

Check out the new netflix doc, Best of Enemies, about the Vidal-Buckley debates during the '68 Conventions.

Parini has a thoughtful section on how Buckley and Vidal were quite similar in a lot of ways.

It's easy to see how they differ; that's all just about anyone seems to want to talk about. But they had ver similar American Aristocratic backgrounds. I much prefer Vidal, obviously, but I wish the Republican party would go back more towards Buckley...Oh! what a dreamer I am!

Synchronistically, I finish teaching a history of television class today, and last week I asked myself what I considered my favorite tv series of all time. Much as I find myself obsessed with "The Walking Dead" this year, I've only watched it once. Looking back, I realized I've watched "I, Claudius" seven or so times and I plan to rewatch it a few more times. I guess I would consider that my all time favorite.