The most popular composers 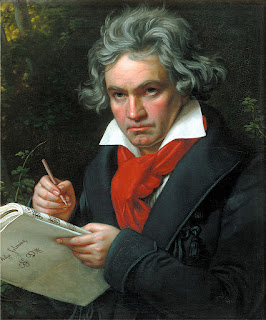 I'm going to justify today's blog posting by contending that Robert Anton Wilson, classical music fan, would have been interested in the article I'm pointing to today.

I've just written a piece for my paper on the most popular classical composers, based on performances during the 2015-2016 performance year by major and regional orchestras. Be sure to click on the infographic that accompanies the story, which has a great deal of information.

The graphic lists the top ten most popular composers, but I obtained a list of the top 20 and included it in my piece, written as a blog post for my paper's website. The guy I interviewed for the piece was surprised Ravel did so well; Eric Wagner, who found my article on Facebook, was surprised by the omission of Debussy and is surprised at how much airplay Dvorak gets on the Los Angeles classical radio station he listens to. I have heard that one of my favorite composers, Prokofiev, is perhaps the most popular 20th century composer, based on the number of performances of his work. This appears to be an exaggeration, although he does come in at No. 11.
on December 09, 2015

Congratulations on your continuing great work on this blog. I would find it interesting to see a similar poll dealing with classical recordings. I suspect more Bach and Vivaldi get recorded than some of the composers whose work gets performed by orchestras more frequently. I wonder how classical radio will fair over the next few years of our changing media landscape.

As Ricky O'Bannon pointed out in my article, the symphony orchestra repertoire is an important part of classical music but it doesn't tell the whole story. Orchestras were not fully formed during the Baroque era, so the work of Bach, Vivaldi, etc. tends to get short shrift in orchestra concerts.

I would be very interested in seeing which composers get the most airplay on classical radio stations. I'm also curious how many people listen to FM radio for classical musical, as opposed to Internet radio. I'm also curious about the demographics of radio listening; i.e., are any young people at all tuning in?

I saw that Denver allowed smoking pot in a designated area during their classical music live performances, in an effort to lure younger people in...which I think is a good idea. I've learned a lot about all kinds of new-to-me music whilst stoned. I wonder how well the experiment is working?

I have my own CDs of classical I listen to, but I also listen to FM classical, but when they're playing too many warhorses I put on one of my Pandora stations. I have a Paganini station, a Kronos Quartet station, a Bach station, and a Stravinsky one. I hear all kinds of new stuff from that. Every time I hear something and not know who it is, but "think" I know who it probably is...and am wrong, because it's someone I've never heard of, I'm reminded of RAW and Zelenka in the SCT.

I wish I could afford to attend concerts, but I just can't. Joshua Bell played near where I live a month or so ago, and I just couldn't scrape up the dough.

Speaking of Prokofiev - who I LOVE! - do you guys like Scriabin? I've never heard anything by Scriabin that wasn't totally fascinating. I know he's a fairly well-known name, but he seems to me maybe the most underrated of composers from the last 150 yrs.

Howdy, Michael. I've begun rereading "A" again, which has me thinking about Bach, although right now I have Wagner playing. I love the Faure channel on Pandora. I read a bunch of Proust this autumn, and that had me listening to lots of Faure. I almost went to hear the Faure Quartet last month. I haven't gone to a classical concert for decades.

I remember reading a great essay in Contemporary Keyboard magazine around 1980 called "How the Play the Name That Composer Musical Intimidation Game". It tried to help the reader guess the names of classical composers on the radio. It seems like the best five page intro to classical music history I've ever read, and I found it very funny.

I heard Prokofiev's Second Violin Concerto on the radio last night. In the early eighties I loved his Violin Sonatas played by Isaac Stern. I like Scriabin. I want to hear Vladimir Horowitz's recording of Scriabin's Black Mass Sonata. Fritz Leiber incorporated that sonata into his novel Conjure Wife, I think. Alfie Bester incorporated it into his Golem 100. Scriabin seems part of that crowd of composers pushing Common Practice harmony towards the abyss of atonality: Debussy, Richard Strauss, Mahler, etc.