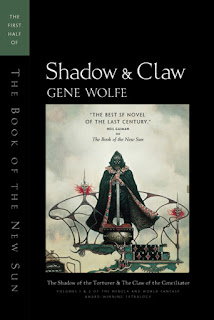 I quoted Gene Wolfe the other day, and I'm going to do that one more time, again from The Castle of the Otter:

A good story is one in which a sympathetic and three-dimensional protagonist has absorbing and unusual adventures against a varied and interesting background. A great story is one a cultivated reader can read with pleasure and later re-read with increased pleasure.

It seems to me that Wolfe's definition of a "great story" would include almost all of the fiction of Robert Anton Wilson, Wolfe's The Book of the New Sun, James Joyces's Ulysses, Vladimir Nabokov's Pale Fire, Jane Austen's Pride and Prejudice and Richard Powers' The Gold Bug Variations, among many other books that could be named.  These books are my personal choices of course — they are all books I had read and re-read — but I'm sure many of you reading this have your own personal list.

We saw Wolfe at World Fantasy Con. He looks and sounds older than God, but the mind that wrote all that great stuff is still running.

And he has come out with a new novel, A Borrowed Man, which I need to get around to reading.