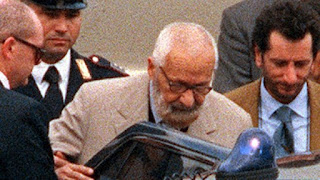 Details of the BBC obituary should sound familiar to anyone who has read many of RAW's books:

"He joined the freemasons in the 1960s and founded the P2 lodge in 1970. A list of alleged members was later discovered by Italian police - and included one Silvio Berlusconi, the future prime minister.

"Gelli was sentenced to 12 years in prison for fraud linked to the collapse of a bank with ties to the Vatican - but never served significant prison time.

"The bank's boss Roberto Calvi - known as "God's banker" for his ties to the Vatican - was found hanged under a bridge in London in 1982, and prosecutors later said they believed he had been murdered."

UPDATE: Michael Johnson sent me the obit from the Telegraph.
on December 18, 2015

Reading the short article on Gelli from Telegraph: if I didn't know it was factual, I'd think it was some sort of "backstory" on a character in a Dan Brown novel...maybe after Brown had crashed on Pynchon for a few months.

If you have a friend who's overly Milled and Humed to puffs up about "people who believe in conspiracy theories", show them this obituary.

RAW followed the P2 stuff very closely, for reasons too intricate to get into here, but for the relatively uninitiated who find themselves reading this: here was an example of Freemasonry being used as a front for a more radical secret society, just as Weishaupt and his gang had used Freemasonry as a cover for the Bavarian Illuminati. To quote Thurber, "You could look it up."