A psychedelic novel from a libertarian author 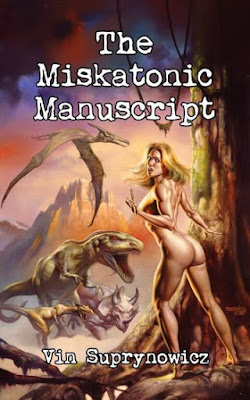 In my duties as a member of the Libertarian Futurist Society, I received an advance review copy of a new novel, The Miskatonic Manuscript, by Vin Suprynowicz, the second in a series of novels about rare book dealers Matthew Hunter and Chantal Stevens, two gun toting, psychedelic drug taking adventurers who find lost manuscripts by famous authors and who travel through space and time. The book came out Friday and is available as a signed, numbered limited edition and as a $5.99 Kindle ebook.

There's plenty of action in the book, including sequences in which Stevens gets to blast away with her firearms at dinosaurs and giant spiders, and a lot of heartfelt discussion about the evils of the war on the drugs and the merits of psychedelics. Large passages are quoted from the writings of Terence McKenna and Alexander Shulgin. I have never read either, but many of the sentiments will sound familiar if you have read Timothy Leary and Robert Anton Wilson.

There's quite a bit of violence in which the pro-drug forces murder authorities involved in the war on drugs. I was put off by much of this, and also thought the writing could have been better. The book evidently is self-published, but it says it was prepared for publication by Invisible Order, a "libertarian publishing solutions" company. The folks at Invisible Order chose to do nothing with the many passages in which Mr. Suprynowicz ties together sentences with a comma, and in general the quality of the prose is not the best part of the book.

Anyone interested in the war on drugs and in psychedelic drugs will likely find the book interesting. The book moves along at a good clip, and  Suprynowicz is interested in many of the same topics as I am and seems to know a lot.

"Large passages are quoted from the writings of Terence McKenna and Alexander Shulgin. I have never read either..." I'd strongly recommend Shulgin's "PIHKAL"!