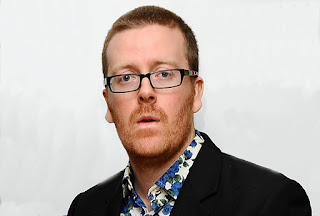 I have a hard time keeping up with American pop culture, let alone British pop culture, so forgive me if I don't know a lot about Scottish comedian Frankie Boyle.  But I do know he's a Robert Anton Wilson fan.

Nick Helweg-Larsen attended a recent event called BAM Live at the Southbank Centre in London hosted by Akala and Frankie Boyle & special guests ("Being A Man addresses the challenges and pressures of masculine identity in the 21st century.")

Nick reports, "In his serious speech he kept mentioning the phrase 'reality tunnels.'
I asked him in the Q+A session about Wilson and he spoke passionately for about 5 minutes.
He talked about E-prime for a while during this."

@akalamusic tweeted: #TBT Frankie Boyle and myself last week at Being a Man Festival. Check out the transcript for Frankie's lecture... http://fb.me/39qPkOnFy