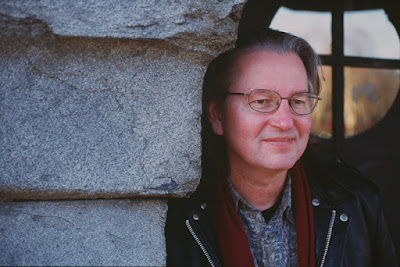 Science fiction author Bruce Sterling. We were really tight once, except for the fact that he didn't know me, and he once invited me to a New Year's Eve party at his Austin house.

We spent most of our time in Mendocino. Roughly speaking, I was in the part of the state that has Adam Gorightly, Oz Fritz, Ted Hand and Michael Johnson; Eric Wagner is farther south, in the LA area.

I wanted to try to meet up with Michael while we were there. As it wound up, we were a bit too far apart for an easy drive, but we wound up talking on the phone for about two hours. It was really interesting, but my wife commented, apparently overhearing part of the conversation, "You're a weirdo!"

Oh, what was your first clue? We've been married for about 14 years. I haven't tried to hide it.

I think I gave Ann a pretty good clue when I took her to a New Year's Eve party, hosted by someone I didn't actually know, about 350 miles from where I live.

Bruce Sterling, if you don't know him, is a science fiction writer and technology pundit. I think Islands in the Net is particularly is a great science fiction novel, but I like many of his other books, too. I think he's kind of a rootless cosmopolitan these days, but for many years he lived in Austin, Texas. On the day I'm writing about, Dec. 31, 2000, he lived in a house with his first wife and two children.

In those days, I was a member of Sterling's Viridian email list. Sterling's response to the problem of global warming was to try to make being "green" fashionable and interesting, and to encourage people to change their lifestyles.

I was on the list, along with many other people. I've exchanged very short email messages with Sterling over the years, but about half the globe can say that; he publicizes his email address, or at least he used to. I'm confident if  you mentioned my name to him, he wouldn't know who I was.

Anyway, in one of his email messages, Sterling mentioned that he was giving  a New Year's Eve Party and he invited everyone who was on the Viridian list to come. Austin is about a five or six hour drive from Lawton, Oklahoma, where I was living at the time, but my then-girlfriend Ann likes to travel and we both knew Austin is kind of a cool city, so we used it as an excuse for a trip. Besides, as Sterling himself said, the 2001 is a big year for science fiction fans. I've always loved SF, but I didn't have an invitation from Arthur C. Clarke, and I loved Sterling's work.

Sterling turned out to be an amiable host, although it was a little weird attending a party where I didn't really know anyone except for my date. I remember that early on, a couple of different people said, "So, where do you know Bruce from?" — because apparently they were attending the party because they lived in Austin, Texas, and actually knew Bruce Sterling — and I had to try to explain. It's too bad it was a party instead of a science fiction convention, though, because if people had been wearing name badges I likely would have recognized some of the names.

We here in Northern California suggest that if you really want to live here send a resume to the Santa Rosa Press Democrat.

Have you ever thought about including a little bit more than just your articles? I mean, what you say is important and everything. However think about if you added some great photos or videos to give your posts more, "pop"! Your content is excellent but with pics and video clips, this website could definitely be one of the very best in its niche. Awesome blog! Also check my latest article http://www.livewritethrive.com/2015/08/03/5-tips-for-making-writing-a-daily-habit/

I live more in the central part of Cali...although I have lived in NorCal in the past...what PKD novel did you read?

I read "Now Wait for Last Year." Good, but maybe not one of his best.