Robert Anton Wilson up for Turner Prize! Well, sort of ..... 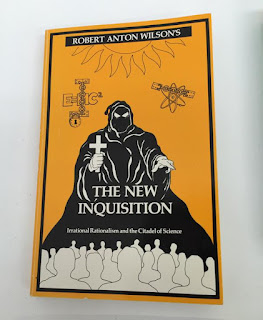 A Tweeter named blurry man Tweeted today, "A lot of stuff to interest the likes of @johnhiggs here. #TurnerPrize." He posted two photos, one of them the above, and I saw the Tweet after John mentioned it on Twitter. John wrote, "History suggests that Turner Prize and Discordianism don't mix well, so this will be interesting /cc @jacksontom."

The Turner prize is a big deal United Kingdom arts prize. Even for modern art, it is an oddball and controversial prize (and I like modern art.) The Wikipedia article on the prize, under the section for the 1993 prize, supplies some useful context for John's remarks on Twitter:

Rachel Whiteread was the winner for House, a concrete cast of a house on the corner of Grove Road and Roman Road, London E3. Jimmy Cauty and Bill Drummond of the K Foundation received media coverage for the award of the "Anti-Turner Prize", £40,000 to be given to the "worst artist in Britain", voted from the real Turner Prize's short-list. Rachel Whiteread was awarded their prize. She refused to accept the money at first, but changed her mind when she heard the cash was to be burned instead, and gave £30,000 of it to artists in financial need and the other £10,000 to the housing charity, Shelter. The K Foundation went on to make a film in which they burned £1 million of their own money (Watch the K Foundation Burn a Million Quid). Other nominees included painter Sean Scully, Laotian-born Vong Phaophanit and printer Hannah Collins.

But I still didn't quite get the connection with the RAW book, so I Tweeted to John, "Can't quite make this out ... was 'The New Inquisition' nominated for the cover art?"

He replied, "No, Bonnie Camplin's is a finalist for her "Patterns" installation, which includes copies of New Inquisition and Illuminatus! The books are part of the art, basically."

A Reuters dispatch from Glasgow explains, "Bonnie Camplin's video installation challenges viewers to think about seemingly outrageous accounts by people who say they were brainwashed by aliens, turned into a cyborg in a special government program or survived an attempted crucifixion by a blood cult on the Orkney Islands."

The winner of the award will be announced on Dec. 7, a date that will amuse Americans who believe that modern art lives in infamy. Thanks, John, for helping me understand what's going on.