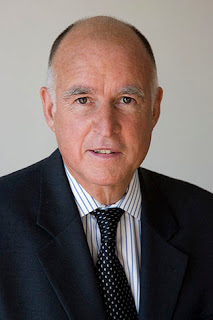 The essay explains that an honest politician is sincerely committed to bettering the nation, but that in practice this means passing lots of laws, which have the effect of creating more and more criminals. "An honest politician, who keeps his nose to the grindstone and enacts several hundred laws in the course of his career, thereby produces as many as several million new criminals."

The book was published in 1980, 35 years ago, so let's fast forward to 2015 and a recent veto message by Gov. Jerry Brown of California.

I was a fan of Gov. Brown in his original incarnation as "Governor Moonbeam" (1975 to 1983) and supported him as a volunteer in his 1992 campaign for president (his platform included getting rid of the distortions and corruption in the federal income tax and replacing it with a flat tax.)

I haven't followed his current career very much, but via Twitter read about his Oct. 3 veto message, vetoing nine bills.

After listing the bills Brown wrote,

"Each of these bills creates a new crime -- usually by finding a novel way to characterize and criminalize conduct that is already proscribed. This multiplication and particularization of criminal behavior creates increasing complexity without commensurate benefit.

"Over the last several decades, California's criminal code has grown to more than 5,000 separate provisions, covering every conceivable form of human misbehavior. During the same period, our jail and prison populations have exploded.

"Before we keep going down this road, I think we should pause and reflect how our system of criminal justice could be made more human, more just and more cost-effective."

Link to PDF of entire document.

He would have made an interesting president.