Sacred bowling alley to be saved for future Discordian pilgrims

Building to be preserved in redevelopment effort 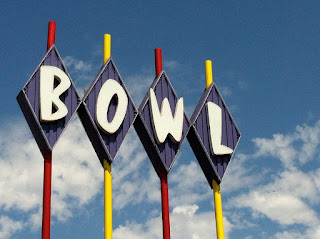 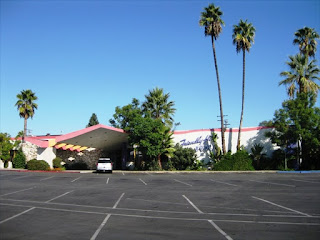 The building in question is Friendly Hills Lanes, a bowling alley at 15545 Whittier Blvd. Whittier, California. In June, the bowling alley shut down after 60 years in business.

But it's not the end of the historic building. It's being redeveloped as a commercial building that will hold retail tenants, including an Aldi grocery store and BEVMO! liquor store. And the redevelopment will be done to preserve the building's historic character, including preserving the outside sign.

That's the word from Don Dooley, planning services manager for the city of Whittier. I interviewed Mr. Dooley.

The new developer, Dan Almquist, has been acquiring the building and is turning it into a three unit commercial building. The existing bowling sign outside will be adapted for reuse, said Dooley, who serves as the secretary for the Whittier Historic Resources Commission, the city body charged with preserving Whittier's historic buildings.

That has allowed the building to be certified by the Whittier Historic Resources Commission as eligible for being designated as a landmark under the California Environmental Quality Act.

This in turn allows Almquist to enter into an agreement with Whittier to carry out preservationist and historic restoration work as he converts the building into a new use. He is entitled to certain tax advantages and will get a measure of flexibility in complying with building codes as he works to preserve the building, Almquist said.

The Historic Resources Commission has approved Almquist's conceptual plans, and he'll be going before the city's planning commission on Nov. 16 for conditional use permits for adaptive reuse of the building.

The building's alleged role in giving birth to the Discordian religion and movement did not come up when the Historic Resources Commission met.

"This is something I am not even aware of. This is the first I have heard of it," Dooley said. "When you are doing  historic resource, you don’t necessarily find all of the information. It could be significant as it's related to the property.”

Mr. Dooley was curious why a reporter in Ohio was interested in the fate of a California bowling alley, and I attempted to explain my blog and my interest in Discordianism.

* Adam Gorightly informs me that the term "Brunswick Shrine" actually was used by Thornley and Hill.

Gosh, that must sound so odd to the uninitiated. I could imagine myself in a city clerk's shoes thinking it's an elaborate prank call.

Seems appropriate that Trader Joe's will be in the space. They sell a tasty uncured hot dog (without all the preservatives and junk)that will be of great service for Discordian rituals that call for hot dogs with no buns.

Doesn't surprise they had no clue about Discordianism. Perhaps we should start on effort to have them erect a plaque...hmmmmm.

btw, Thornley and Hill dubbed the place The Brunswick Shrine. I only report the facts!

Ooops, where'd I get Trader Joe's from? An example of how we seem to be living in alternate dimensions where in one version of this article the plan was to have a T.J.s in the building?...

Well Historia Discordia, Trader Joe's is owned by Aldi so you were close!

@HistoriaDiscordia: It's my understanding that the sign won't be torn down but will be used in some fashion, but I'm not clear on exactly what they are doing. I plan to keep following the story.

In a sense, Tom is part of an elaborate prank. All religion grew from something similar, in some sense. Good work.