Cosmic Trigger for the next group read? 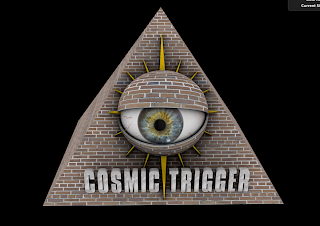 Christian Greer wrote to me recently to ask what the next group read will be on this blog... It's a topic I've been needing to take up.

Since this blog was created, there have been readings of Quantum Psychology, Masks of the Illuminati, Coincidance and, most recently, Illuminatus!

There are obviously many books that can be considered, but here are the arguments for Cosmic Trigger: The Final Secret of the Illuminati: (1) It remains one of Robert Anton Wilson's most popular and influential books; (2) It is timely, given that the estate is planning very shortly to issue a new edition; (3) It is also timely, given the interest, particularly in the UK, in "Chaos Magick" and in magick in general. (4) Daisy Eris staged a dramatic adaption of it in the UK. She plans to revive it there, and bring it over to the United States in 2017.

Other books have of course been suggested.

Eric Wagner has nominated  Pale Fire by Vladimir Nabokov. (As I understand it, the books use of footnotes influenced the structure of RAW's The Widow's Son.) Christian suggested The Book of the Subgenius. Christian writes, "Its debt to Illuminatus! is immense, e.g. numerous reference to Atlantis myths, Lovecraftian gods, etc. It even mentions Eris (and Discordians) on a number of occasions! Furthermore, it is damn amusing."

I happen to be particularly fond of Cosmic Trigger Vol. 2: Down to Earth, which I think is a bit underrated. And then again, we haven't tackled such major works of fiction as the Schroedinger's Cat trilogy and the "Historical Illuminatus!" books.

I like Nabokov, and I would like to participate in a discussion of Pale Fire someday, but I'm concerned about how many people would take part in a Nabokov discussion on a RAW blog; Eric, myself, and who else? Then again, Nabokov and his legacy need no help from me. His books remain in libraries and bookstores, new books about him come out all the time (there was a long review of a new book in the Wall Street Journal not long ago) and his place seems secure.

I'm more about securing the place of writers who haven't gotten enough recognition. One of my previous Internet efforts was to publicize George Alec Effinger.  If you don't know who he was, well. that's kind of my point. Robert Anton Wilson's place in the literary canon has not been secured yet. As Christian wrote to me, "From where I stand, there is a good deal of significance in being involved in RAW related projects. I'm under the impression that his day has yet to come. Indeed I hope that my dissertation will play some small role in that."

If we do a discussion of Cosmic Trigger, how would early next year sound to most of you? And would anybody be interested in doing some guest posts, or even leading the discussion?
on October 05, 2015

Tom, this sounds like a good idea. I would enjoy the Nabokov (and I suspect a variety of people would participate), but the Wilson sounds good too. If we do this, I would suggest doing all three Cosmic Trigger books.

(This comment page requires me to say "I'm not a robot". I seem like a robot sometimes, but so it goes.)

Sounds like fun! Sign me up for a guest post if you'll have me. Maybe whatever Hilaritas releases as its first should be our read, so as to talk about whatever new material or introduction might appear in it?

I would happily participate in a Nabokov reading group and have been meaning to revisit the Cosmic Trigger trilogy for a month or so now- so either sound promising. I've been using the first book for bibliomancy lately with predictably entertaining results.

I just reread (the abridged) Schrodinger's Cat over the Summer; I originally had the three separate volumes with more of The Sex Magicians retained and really did prefer the uncut version of The Trick Top Hat (my favorite in the trilogy). It is truly one of his most underrated books and for my money much more satisfying than The Historical Illuminatus books. While Nature's God and The Widow's Son are incredibly good novels, Nature's God has never failed to disappoint me. I guess I'm just blathering.

Reading Flann O'Brien's work would be very relevant to a RAW reading group: and in the rare occurrence you have not yet read The Dalkey Archive or The Third Policeman they are both a load of fun. Also in the vein of odd Irish books that RAW would have delighted over: The Dirty Dust by Martin O Cadhain which just received its first English translation.

Eric suggested that I reach out to you about finding a university that would possibly be open to me doing my graduate research on Wilson and his works. I'm especially interested in approaching him as a magician, futurist, counter culture figure and chronicler, literary critic, and important American author. If you have any knowledge of a department that has "tolerated" such nefarious topics for students I would be very grateful for any help you could provide. My email is gregoryarnott@gmail.com.

The reading group sounds fun, after some unsuccessful attempts at starting a Finnegans Wake, Castaneda, and NLP reading group in my physical reality it would be nice to settle for something digital. Haha.

I loved Trick Top Hat too. Probably my favorite piece of RAW fiction. As a whole series, I like Illuminatus! much better than SC.

But I particularly liked Trick Top Hat because I loved the Cagliostro character. TTH seemed to be where most of his action takes place.

Are you aware whether TTH as an individual volume has more Cagliostro material than the all-in-one volume?

You're after my own heart: Hugh Crane makes The Trick Top Hat my favorite as well. (The general Utopia described doesn't hurt either.) I can't remember there being too much missing from the account of Cagliostro's life in the abridged version; it's mostly the raunch that was taken out...for a pot-addled, sex-obsessed magician those are sometimes the best moments.

If you haven't already read it, you might appreciate this earlier rendition of what's basically all of the Cagliostro/Crane bits in one complete article. There are some different twists, some additions, and some missing details.

Then there's this cool illustration by Bobby Campbell: http://weirdoverse.com/cagliostro-great/

John Prine, Tom Robbins, Mr. Wilson are american writers always having influence on my creative output. For lyric, fiction, and non-fiction, they are my choice cuts of Americana. I can remember finding the first John Prine cassette tape (Prime Prine), and Robbins novel (Skinny Legs and All) but can't remember my actual first time reading RAW, like he was always there, like the Lincoln Library or the Sears catalogs. He has made much purchase into my lasagna yet, I have not paid a cent for his output. We don't even have pennies in Canada anymore. These writers make Fugio sense.

Definitely in favor of a Cosmic Trigger reread. Or any other RAW we haven't done yet.

For some reason, I was particularly taken with THE UNIVERSE NEXT DOOR.

Chad, I'm not clear on what Hilaritas will release first. I had the impression that it would put out the first three books at more or less the same time, but i don't really know. I keep being told they will be out soon.

I emailed Rasa asking which book would come first and whether he could give me any hints as to any of the details. He politely said no hints, but did say we could expect "new material." Whether that's in the form of new introductions or previously unpublished RAW material, I wonder.

A Cosmic Trigger read would be fun.

Cosmic Trigger! It's the seed book!