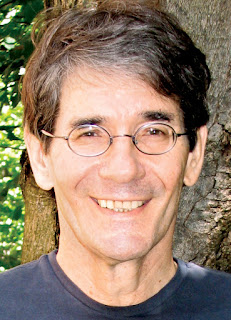 I have been reading Browsings, the new book by Michael Dirda, who is a Pulitzer Prize-winning book critic for the Washington Post. Dirda likes all kinds of books and is a big science fiction fan (apparently he goes to 2-3 SF conventions a year, including Readercon.)

I mailed a copy of Illuminatus! to Ted Gioia a couple of years ago, and Gioia eventually actually read it and posted a review.

I'd been thinking of sending another copy to Dirda, but it looks like I needn't bother; he's familiar with it. Here an excerpt from an online chat:

Lesser Perplexia: Goodbye August, hello September and Mr. Dirda: Can't stand the wretched summers here. Is "Housekeeping" (now) a stealth classic? I don't recall much patter previously, but if her new book strikes fancy she'll be a re-heated topic. Anyway, great is the number of finds from this exchange (thanks, all!) and after last week I raced out and read it. [Sublime] distillation of words said one critic... indeed. I think what she wanted to talk about outweighed the book's structure but, strange, was hopping the rails in fashion for women? And how would you describe transcendence?

Somehow while scramming about Robinson, I fell in a hole about Robert Anton Wilson. Probably not your spot of tea but how could I never have heard of him? Thanks.

Michael Dirda: Nice riff on Robinson. I'll be writing about her new book Gilead later this fall. [They are talking about the acclaimed novelist Marilynne Robinson -- The Management].
Robert Anton Wilson--so you're into the Illuminati, are you? Conspiracy theory, kinky sex and all that? His books are fun to read, but I've never felt that they were worth returning to. I could be wrong.

More by me about the new Dirda book and being a book nerd.

I love Dirda. He's a mainstream critic who appreciates good genre work and recognizes John Sladek as a genius who was too avant-garde for the sf crowd and too sf for the avant-garde. I also love Marilynne Robinson, for her nonfiction. Absence of Mind is a great attack on materialism.