'All your data belong to the government' 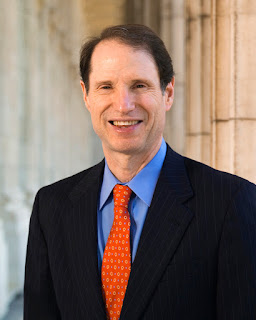 The latest government surveillance bill in Congress, S. 754,  seems to be well on its way to passage. "Let's tell private businesses in America that they should share consumer data with the federal government to help stop vague cyberthreats, and in exchange immunize them from liability for any possible violations of users' privacy. What could possibly go wrong?" writes Scott Shackford at Reason.

Here's how they voted in the U.S. Senate.

I'm pretty down on politicians in Congress at the moment, even more than usual (the two most prominent "libertarians," Rand Paul and Justin Amash, both voted for war with Iran by opposing the nuclear inspection accord, and one of my senators, Sherrod Brown, just endorsed Hillary Clinton), but Sen. Ron Wyden of Oregon has been good on this issue, so I'm following him on Twitter and posting his photo here. (Brown voted against S. 754, so we have to give him that, and he voted for the Iran treaty. All of his good work on civil liberties and peace will be negated if Clinton is elected, but the Republican nominee likely will actually be worse. How was YOUR week?)