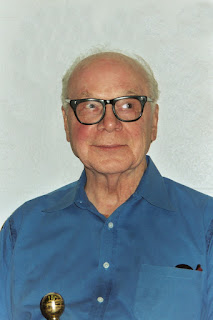 At the Daily Grail, John Rappion has a piece called "The Wold Newton Meteorite: from Outer Space into Fiction," which explains how a large meteorite that fell in 1795 helped inspired an alternative universe of the science fiction writer Philip José Farmer, and also is mentioned in other works of fiction. About Farmer, Rappion explains:

In Tarzan Alive: A Definitive Biography of Lord Greystoke (1972) Philip Jose Farmer presented the life story of Edgar Rice Burroughs' Tarzan as if he were a real person. In the book it was revealed that two carriages, travelling along the road at the time, were within 20 feet (6 metres) of the Wold Newton Meteorite when it landed. The people travelling within were exposed to a burst of ionizing radiation from the stone which caused mutations within themselves and consequentially their future offspring. Ancestors of Lord Greystoke (Tarzan), Solomon Kane, Captain Blood, The Scarlet Pimpernel, Harry Flashman, Sherlock Holmes, Professor Moriarty (AKA Captain Nemo), Phileas Fogg, The Time Traveler from The Time Machine; Allan Quatermain, A.J. Raffles, Professor Challenger, Richard Hannay, Bulldog Drummond Fu Manchu, Sir Denis Nayland Smith, The Shadow, Sam Spade, Doc Savage, his cousin Pat Savage, Monk Mayfair, The Spider, Nero Wolfe, Mr. Moto, The Avenger, Philip Marlowe, James Bond, Lew Archer, and Travis McGee, were among those present. According to Farmer then, the strength, intelligence, and general superhuman qualities of all these pulp heroes and villains are the result of the impact in that muddy Yorkshire field in 1797. The connected roster of characters has become known as The Wold Newton Family.

Robert Anton Wilson may have alluded to Farmer's Wold Newton universe in Masks of the Illuminati, as I mentioned in a previous blog post:

"The boy's mother was Lady Catherine (Greystoke) Babcock" and subsequent sentences, Page 27. This sounds like a nod to Philip Jose Farmer's Wold Newton family, which ties various characters in fiction (such as the Greystokes, e.g. Tarzan's family) into one family. Farmer and Wilson were fans of each other's work.

Wilson was certainly familiar with Farmer's work. For Wilson on Farmer, and Farmer on Wilson, go  here.

I used to read a lot of Philip Jose Farmer, and I re-read the World of Tiers series a few years ago. The Riverworld books that Wilson writes about are good, the World of Tiers books are good and "Riders of the Purple Sage"Wage" is maybe my all-time favorite science fiction novella.

Time for some more coffee, Tom. :)