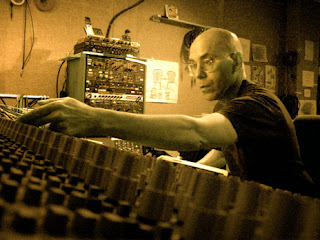 Oz Fritz in the recording studio.

[Recording engineer Oz Fritz, one of the most prolific commenters in the Illuminatus! online reading group, always has lots of interesting things to say about magick and music, among other topics. Read his blog. He did a special guest posting for me when I asked for one. Oz's credits as a recording engineer include Tom Waits, the Ramones, Blur, White Zombie, Primus, The Golden Palominos, Elvis Costello (in a Wanda Jackson session) and many others. He released an album, too. -- The Management.]

Illuminatus! - a pillar and touchstone of contemporary literature, one of the most important books of the XXth Century for promoting liberty in all possible ways, in particular, the liberty to create your own reality.  This includes the liberty to voluntarily be a slave to something higher or lower like a job of some kind.  On one level, Illuminatus! appears a product of advanced occult technology, a spiritual heir of such works as Beelzebub's Tales to his Grandson, Magick, and Finnegans Wake in the sense of presenting fragmentary, coded, lines of freedom which could eventually lead to more fully realized potentials and greater abilities for some people.  Nietszche's Superman gets blatantly alluded to in Illuminatus!  Fragmentary and coded for each individual to begin putting the puzzle together however they see fit, also to unveil more information over time as the reader's understanding progresses.  It also seems that Illuminatus! promotes a certain kind of feminism in the same way that Joyce did with Anna Livia Plurabelle in Finnegans Wake, a joyful, reverential, portrayal of female mysteries and intelligence with a subtle (sometimes not so subtle) call for greater understanding in that area.  The last lines of  Finnegans Wake apply equally to Illuminatus!:”The keys to. Given!  A way a lone a last a loved a long the”

I once heard RAW say on a tape that one reason he enjoyed Crowley and Joyce so much had to do with the endless puzzles to solve in their works.  Reading them repeatedly was like peeling back an onion skin to reveal ever deeper layers of jokes, riddles and allusions.  This is why I enjoy Illuminatus! Immensely.  It gets deeper and deeper every time you read it.  It's proven extremely useful to read in a group to get the different perspectives.  Thank-you Tom for setting this up and keeping it going!

Someone once said that certain books are like monasteries, repositories of all sorts of arcane knowledge.  Illuminatus! matches that description; you can just as accurately call it a modern grimoire.  It's also interesting, and an indication of the potency of the work how much synchronicities increase when reading Illuminatus!; also with Schrodinger's Cat.  It seems like a sort of variable attunement occurs between different fragments of Illuminatus! and the external world.  The conclusion of this collective reading of Illuminatus! coincides with a liberal landmark decision by the Supreme Court for  gay marriage rights.  In my opinion, Illuminatus! brings what Burroughs called the Magical Universe to   life.  Shea and Wilson succeed in their mission to immanentize the Eschaton by providing an immanent plane of information and references for each person to create their own heaven on Earth, which is what Eschaton means according to Wikipedia.  Eschaton also means "trying to make that which belongs to the afterlife happen here and now (on Earth)" thus identifying Illuminatus! as another map of the bardo, a book of the dead.
on July 16, 2015

Cool summary, Oz. I've also enjoyed your comments during the read through.

Thanks fuzzbuddy and Eric - also to Tom for the great intro and for posting this summary, I appreciate it.

I really enjoyed this.

As always, Oz, you are a wizard!