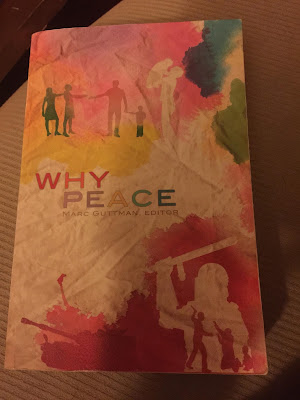 The libertarian movement is a kind of three-legged stool which emphasizes the free market, civil liberties and peace, and yet it seems to me that many libertarian writers tend to write most about the free market and least about peace. I'm currently reading the new Charles Murray book, which at least so far (I'm about halfway through) says nothing at all about foreign policy.

Chad, an editor at Antiwar.com and the Center for a Stateless Society, writes, "For starters, this is a phenomenal, easily accessible anthology of essays that I highly recommend. You'll recognize some of contributors in it. What's neat about it is the diversity of topics and perspectives. Some of the essays are deeply personal. Others are very academic.

"It's called Why Peace.  Look it up on Amazon. Can't recommend it highly enough. It covers such a broad range of conflicts and different libertarian antiwar messages that I see it as the best overview for a libertarian foreign policy.

"The editor, Marc Guttman, is a local Connecticut libertarian who also has an excellent anthology called Why Liberty. See if you can read his introductory essay in Why Peace on Amazon for a taste."

(Follow up from Chad) "The Mises Institute Bookstore's foreign policy section is excellent. Libertarian historian Ralph Raico's Great Wars &Great Leaders was a fantastic primer on WWI & WWII revisionism. Also in the Mises Store (I think) is Defend America First, Garret Garrett's Saturday Evening Post columns from the lead up until entry into WWII. Very libertarian and chilling to the bone.

"Ron Paul's A Foreign Policy of Freedom was fantastic. It's his foreign policy floor speeches from his many years in Congress. Libertarian and heavy on the Constitutional case against war.  As you can imagine, it covers several conflicts.

"Tom Woods' and Murray Polner's We Who Dared to Say No to War is another great collection. Just look at its table of contents for a flavor. Whenever I write an article I get it out because it's so rich with brilliant antiwar quotes.

"Goodness, I forgot to mention Rothbard. Have you read his essay War, Peace and the State? It's as seminal as any libertarian book out there. He's got other good foreign policy stuff too. This is the single best though.

Smedley Butler's book War is A Racket is supposedly a classic too. I have not read it."

Walker sent me another recommendation: War is the Health of the State: The Impact of Military Defense on the History of the United States, a long paper from Jeffrey Rogers Hummel, available here.