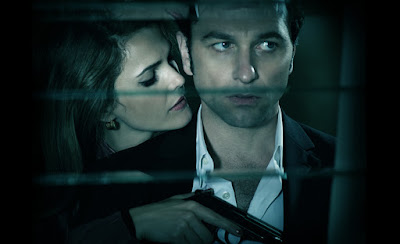 Paranoia and the sense that each character is not really getting the whole picture are recurring features of Illuminatus! They also dominate the landscape of The Americans, currently my favorite TV show.

I discovered the show when my wife the librarian brought home a DVD set from the first season. So far,  I'm almost done with the first season (so please, no spoilers in the comments). There are three seasons so far, with a fourth scheduled to start in 2016.

If you aren't familiar with it, The Americans is about a man and a woman from Russia, both KGB spies, who live undercover as Americans in the Washington, D.C. area, ostensibly making a living running a travel agency in the the early years of the Reagan administration. They seem like ordinary Americans, and their two children don't know their real profession.

Everyone has secrets, including even the kids. In one episode, Mom and Dad are kidnapped by the KGB for awhile, so the kids have to get home from the mall by themselves when nobody shows up to give them a ride. A young man who offers them a ride turns out to be a creep, and they wind up hitting him over the head with a beer bottle and making their escape. The older kid, a girl, instructs the boy that they won't tell their parents what happened. The parents have to make up an excuse for their absence, but they don't realize the kids fed them a false story, too.

Just as in "real life" and in Illuminatus!, what the characters know about what is going on is a mix of reality and misinformation. The main Russian spy has a made-up persona as an American counterintelligence agent, which he uses to seduce a woman who works for FBI counterintelligence. Poor Martha is sleeping with a romantic AND national security double agent. But she thinks he's the best mate she ever had, and who's to say she's wrong? That's her reality tunnel.

"Just as in "real life" and in Illuminatus!, what the characters know about what is going on is a mix of reality and misinformation."

RAW described the three aspects of guerrilla ontology: some things seem obviously true, other things appear blatantly false, while the third category contains things that could plausibly be true, but could also be false, you don't really know.