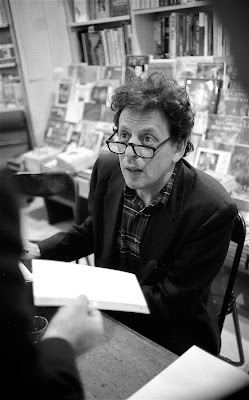 I like some of modern composer Philip Glass' music very much (particularly certain piano pieces, such as the "Six Etudes"), but some of his other music I am indifferent about. But I very much enjoyed his new memoir Words Without Music, which I thought was very interesting.

I mention the book here because I was struck by how many common interests Glass has with Robert Anton Wilson. Here are the ones I can remember (1) They both liked the poetry of Allen Ginsberg very much (Glass was a good friend of Ginsberg); (2) They were both into Alfred Korzybski; (3) Both read Herman Hesse pretty closely; (4) Both were interested in Buddhism; (5) Both were into classical music; (6) Both had a strong interest in 1950s bebop jazz; (7) Both liked the writing of William Burroughs — in fact, both were on the program of the Nova Convention held in Burroughs' honor in 1979.

Perhaps all that this really means is that people who shared 1950s beatnik culture had many commonalities,.but I thought I'd remark on it.  Does anyone know if RAW listened to Glass' music?

Depends how much weed he'd smoked : )

He did have a significant history with one of the "other" Bob Wilsons...