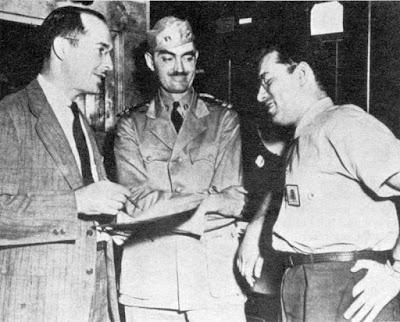 When I was a teenager, Isaac Asimov probably was my favorite writer, and Arthur C. Clarke was my favorite science fiction writer. So for me the Big Three was in effect a Big Two.

But I was a science fiction fan, so I read plenty of Heinlein, although I never got around to reading pretty much every word like some of my friends. Robert Anton Wilson was a big Heinlein fan; in this interview, he said, "Heinlein has been an idol to me for more than 20 years. He can do no wrong, no matter how much he loves wars and hates pacifists."

Heinlein has always been controversial; still, I was started to read this Cory Doctorow passage in which Doctorow attempts to select the most offensive Heinlein book:

Which brings me to Farnham’s Freehold, a strong contender for the most offensive of all of Heinlein’s novels. Published in 1964, it features a nuclear holocaust and a post-apocalyptic world in which African-Americans are ascendant and have enslaved the remaining white people, whom they occasionally eat. Incredibly, this does not automatically qualify Farnham’s Freehold for Heinlein’s Most Offensive prize, because his typewriter also produced books like Sixth Column (America under the cruel dominion of the Yellow Peril), Friday (sure, rape’s bad, but hey, relax and enjoy it, why don’t you?), and I Will Fear No Evil (there are no words).

Of the books Doctorow mentions, I've only read Friday; I remember thinking the rape scene was weird, but I didn't have a strong opinion of the book one way or the other.

I do wish Cory had said which Heinlein books he thought were the best, or perhaps the least offensive. I really liked The Moon Is a Harsh Mistress, Double Star and Stranger in a Strange Land. I liked Double Star, too. Time Enough for Love was long and weird but had its moments for me. I didn't like Starship Troopers or Glory Road.

Farnham’s Freehold may be sf's first great Racefail. Heinlein tried to attack racism by satirical reversal, and it came out very badly. I Will Fear No Evil probably has a good book hidden somewhere in it; Heinlein got sick before he could give it the kind of self-editing he gave Stranger. (Unfortunately, it sold so well that he decided he no longer had to edit himself.) I didn't like Starship Troopers either. As Alexei Panshin said, a recruiting film.

The best modern scientific fiction of all is the recognition of distinct races where there has been only one for some time now? Scientifically speaking of course. In science fiction, we can have as many races of human beings as imagination will allow, but not in factual science.

Of well, I loved all those Heinlein books. Heinlein didn't like the idea John Campbell gave him for Sixth Column. Heinlein found the idea racist, and tried to improve it. Heinlein speculated about possible futures. Some of these futures, like in Farham's Freehold, don't seem PC.

Congratulations! this blog is very interesting and has information most important we invite you to visit our blog
whatsapp baixar
baixar whatsapp
baixar whatsapp gratis
whatsapp

Thank your site! Can you sharing some updates on how you have made this powerful post!
happy wheels | fb login | abc ya

Thanks for your post! I hope you will continue to make similar posts like this! It is really necessary for those who want to learn about them!
may phat dien