Just another synchronicity: As I worked on this blog post, I found this clip from "Manhattan Melodrama" of Clark Gable, doing "a little favor for a friend," by shooting an actor with my name, Thomas E. Jackson. (He was "also known as Tom Jackson," just like me.) I'll have to track down a copy of the movie. 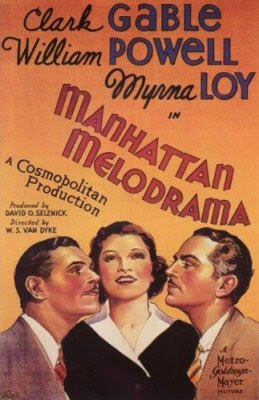 "See the sequel, The Homing Pigeons," page 798. I don't know if it counts as a sequel, and I don't remember Robert Simpson in it, but The Homing Pigeons is the third book of RAW's Schrödinger's Cat trilogy.  Eric Wagner has a good essay on the book in An Insider's Guide to Robert Anton Wilson.

"Hagbard finally blasted off for the stars in 1999," page 800. In Poul Anderson's novel about immortal human mutants, The Boat of a Million Years,  the characters make a starship and leave Earth. Despite what RAW says here (fourth question and answer)  Poul Anderson had his moments (for example, in Tau Zero.)

"a sample of the man's delusions" and "ANTHRAX LEPROSY DELTA," page 801. Not long after Illuminatus! was published, there was an outbreak in the Soviet Union in 1979, when military anthrax accidentally leaked from a Russian military facility — a bit of forecasting that probably hasn't gotten enough attention.

(Next week: Final thoughts on Illuminatus! and the online reading group, from me, Eric Wagner and anybody else to cares to send something in.)

The Anthrax Leprosy Delta guy winds up in St. Elizabeth's, which even Illuminatus wasn't twisted enough to suggest would become NSA headquarters.

Thanks for the kind words. Mondays won't seem the same with our Illuminatus! portion.

p.801: "The other strains were much the same, up to Anthrax Leprosy Pi."

Up to and INCLUDING Pi? Or not? Not specified. Semantic ambiguity, a fluidity. A lot like Anna Livia Plurabelle, and the ALPs of FW: the feminine principle, and hard to square with death by biological warfare.

In fact, it begs for something wholly Other, eh? Perhaps I read into this.

Michael, I certainly think the ALP is no coincidence, and I'm glad you spotted it.

The ALP on p.801 appears intentional. We are in Appendix Nun = Death (tarot). In the Anthrax Leprosy Delta entry they show what eats and kills alchemical work or at least pointing out the horrible reality of that. One key phrase indicator from a Joycean view = "... it was like many of us." Anthrax Leprosy Pi = ALP also subject to being et, but ALP seems much more than the feminine principle though that's a key; ALP = aleph = The Fool - a particular kind of nonhuman body also subject to growth and theft. Anthrax = a mostly animal disease; Leprosy = a mostly human disease; Pi suggests Pe = war, a spiritual disease as well as human/animal; Pi also = the ratio of a circle's circumference to its diameter - how big the circle gets in spite of its "die am eater" and with help from "the ra she o." to put a qabalistic twist on the ordinary meaning.

Last words in the book, p.805: "... and determined pace toward the Senate Office Building. The tune was "My Heart's in the Highlands."

"Illuminatus!" begins in New York's Central Park, which, to me, signifies the Heart of the Labyrinth, New York standing in for the labyrinth and Central Park the heart as Tiphareth (= the heart) occupies the Central Park of the Tree of Life. The labyrinth = another designation for the Abyss as well. The last words obviously resonate with the opening location.